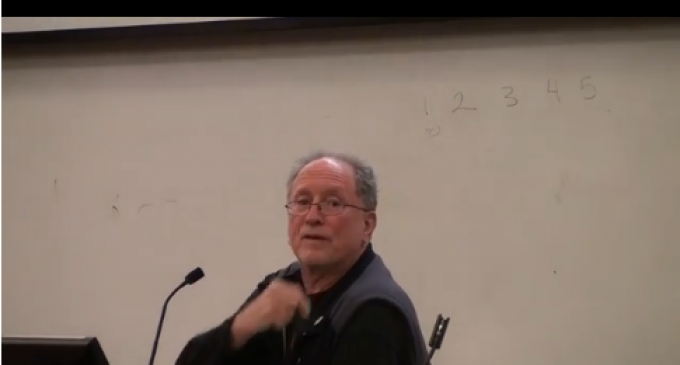 Watch this video and decide for yourself, is Bill Ayers joking here when he claims to have written ‘Dreams Of My Father'?

Also, check out this article on cashill.com that examines the issue of Ayers writing the book in detail.

The Weather Underground domestic terrorist who helped launch Barack Obama’s political career in Chicago is promoting a new book based on the belief of many that the president’s personal life story is based on a lie.

Bill Ayers, the bomb-planting Vietnam War protester who somehow escaped prison for his crimes and is now a retired professor of education at the University of Illinois in Chicago, has long been fingered as the real author of Obama’s alleged autobiography, “Dreams of My Father.”

After the mainstream media spent years defending Obama’s authorship, the subject has gotten largely lost, except for the efforts of some convinced conservatives like Jack Cashill at American Thinker who’s convinced many that Ayers was Obama’s ghostwriter. (Cashill makes the case here. Anyone who thinks Obama’s a fraud generated largely by a media fan base will enjoy it.)

Now, Ayers himself, wants to use that to make money for himself.

Ayers reveals how he has navigated the challenges and triumphs of this public life with steadfastness and a dash of good humor—from the red carpet at the Oscars, to prison vigils and airports (where he is often detained and where he finally “confesses” that he did write Dreams from My Father), and ultimately on the ground at Grant Park in 2008 and again in 2012.

Note the cute quotes around “confesses.” (He probably does it the same way he does in the video below.)

Nothing cuter than libs playing games with the truth. And the truth, according to writers like Cashill, is that nothing credited to Obama’s name is anything like “Dreams of My Father” – certainly not its followup “The Audacity of Hope” named after a sermon delivered by Jeremiah Wright, Obama’s racist, liberation-theology spewing pastor at Chicago’s Trinity United Methodist Church.

Check out this video of Ayers speaking at Montclair State University in Montclair, N.J. He first makes the unprompted claim that he wrote the book, then tries to pass it off with a joke about royalties.

Is he really joking?