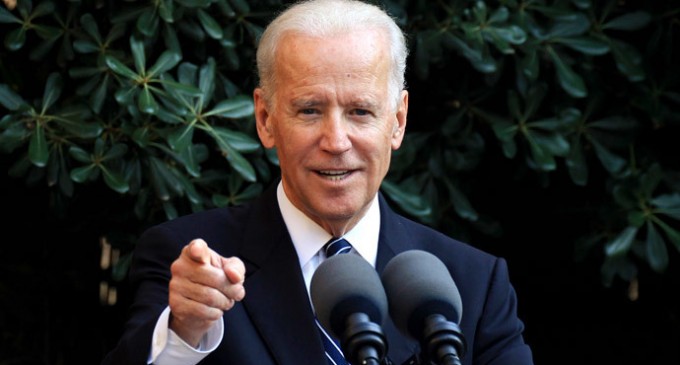 “I believe we and mainly you have an incredible opportunity to lead in shaping a new world order for the 21st century in a way consistent with American interests and common interests,” Biden stated.

These sold-out politicians have never sounded more like a broken record than they do now.
Anyone else sick of hearing this phrase?

Biden called on images from the end of World War II, part of a White House push to burnish a foreign policy that has been challenged by Russian aggression and continued trouble from North Africa to Afghanistan.

“I believe we and mainly you have an incredible opportunity to lead in shaping a new world order for the 21st century in a way consistent with American interests and common interests,” Biden said before shaking hands with 995 members of the class of 2014.

The reference to a “new world order” echoed a similar goal set by President George Bush after the collapse of European communism.

Biden described the new order as a world that seeks human rights, free trade and an end to poverty and oppression.

“One thing we know, if America isn’t on the field, the vacuum will be filled,” Biden told cadets and a crowd of more than 22,000 people in Falcon Stadium.

Biden described administration plans to leave nearly 10,0000 troops in Afghanistan after combat operations end on Dec. 31. And, according to Biden, those troops will have the responsibility of tracking down the remnants of Al Qaida.

The Afghan government hasn’t signed off on a continued U.S. troop presence after a United Nations mandate for the U.S. mission there expires on Dec. 31.

Biden said he understands those who want all U.S. forces home and said those feelings are similar to sentiments following the end of World War II.

“There was an overwhelming desire of our grandparents and my parent’s generation to bring home every single one of the 12 million forces stationed in Europe and Asia,” he said.

The continued military presence abroad after World War II, though, served a high purpose, he said.

“They knew they had to lay a foundation for a new world order, an order that brought the longest period of sustained and peace in Europe and Asia,” he said.