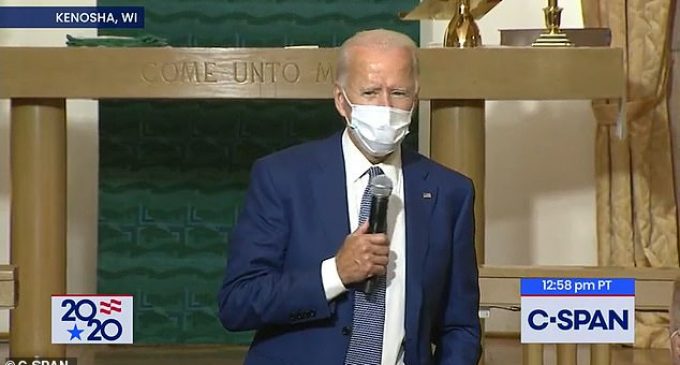 During a speech in Kenosha, Wisconsin on Thursday Presidential candidate Joe Biden made the claim that a black man created the light bulb, ‘not a white guy named Edison.’

‘I cannot guarantee everything gets solved in four years, but I guarantee you one thing, it will be a whole heck of a lot better,’ said Biden.

‘Why in God’s name don’t we teach history in history classes,’ he questions. ‘A black man invested the light bulb not a white guy named Edison.

‘There’s so much. Did anybody know?’

Latimer, an accomplished scholar and inventor, designed a carbon light bulb filament in 1881 and patented it in 1882. According to History.com, his iterative contribution to the technology greatly improved each bulb’s durability:

Latimer, the son of runaway slaves, began work in a patent law firm after serving in the military for the Union during the Civil War. He was recognized for his talent drafting patents and was promoted to head draftsman, where he co-invented an improved bathroom for railroad trains.

His successes would garner him further attention from the the U.S. Electric Lighting Company, putting him at a company in direct competition with Edison, in 1880. While there, Latimer patented a new filament for the light bulb, using carbon instead of more incendiary materials, like bamboo, that were commonly used for filaments. The addition of the carbon filament increased the life span and practicality of light bulbs, which had previously died after just a few days. In 1884, he went on to work with Edison at the Edison Electric Light Company.

According to fact-checking site LeadStories.com, this false meme became popular thanks to an article from “LibertyWritersAfrica.com,” a race-obsessed blog which has seen many more of its headlines disputed, such as:

• “Meet The Black Family Who Produced Cars For 100 Years Before Henry Ford”
• “Research Shows That Chemicals in Foods Are Making Young Men Gay In The U.S.”
• “How Black Female Prisoners Are Sterilized To Cut Welfare Costs In California”
• “The First American President Was A Black Man — Not George Washington”