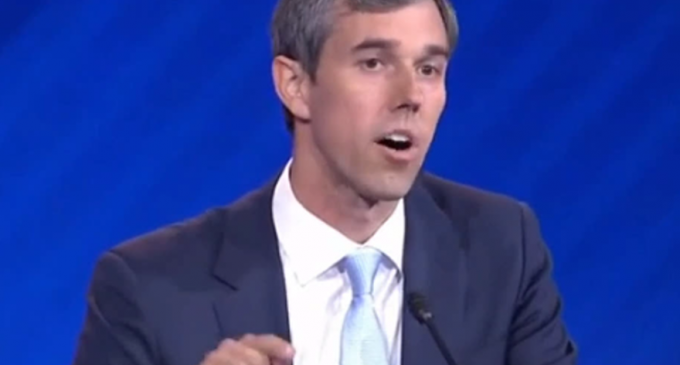 Presidential candidate Robert Francis “Beto” O’Rourke has gotten mighty bold as of late with his demands for gun confiscation. He not only insists it is what ‘will happen', but also claims that gun owners are ready for it.

Two weeks ago he told a reporter, “I want to be clear: That's exactly what we're going to do. Americans who own AR-15s, AK-47s will have to sell them to the government. We're not going to allow them to stay on our streets, to show up in our communities.”

O’Rourke continued his ‘tough guy' stance last night at the Democratic debate where he boldly claimed: “Hell yes, we’re going to take your AR-15, your AK-47.”

Republican Texas state Rep. Briscoe Cain immediately tweeted a response to the Texas Democrat using his birth name: “My AR is ready for you Robert Francis.”

“This is a death threat, Representative. Clearly, you shouldn’t own an AR-15—and neither should anyone else,” O’Rourke replied on Twitter.

Twitter’s rules on safety specifically states, “you may not threaten violence against an individual or a group of people.”

Cain accused O’Rourke Friday of spinning his tweet into a death threat.

He told CNN his words were “not a true threat at all,” but a reflection of the popular Texas saying, “Come and Take It.”

“What this really shows is how, how dangerous some of this is that people want to try and spin somebody’s words in order to try and take their guns away,” he told CNN. “And Beto O’Rourke knew that. He knew exactly what it was, and he seized the day to try and make some news.”