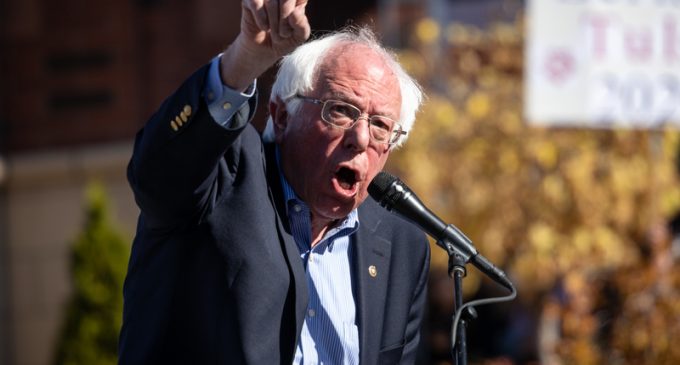 Staffers for presidential candidate Sen. Bernie Sanders (I-VT) are calling on the 2020 hopeful to practice what he preaches with a letter to campaign manager Faiz Shakir complaining that they are making “poverty wages,” and demanding that Bernie pay them a $15 per hour minimum wage.

Of course, Sanders vehemently demands that businesses pay workers a ‘living wage' and pledges a federal minimum wage of $15 per hour should he win the White House.

But unionized workers on Sanders’ own campaign say they wish he would start now — by paying a higher wage to them.

According to a report, members of Sanders’ staff have been using the senator's own campaign rhetoric against him as they try to wrestle more pay from the self-described democratic socialist.

In a letter to Sanders campaign manager Faiz Shakir, the campaign staffers claim they “cannot be expected to build the largest grassroots organizing program in American history while making poverty wages,” the Washington Post reported.

“Given our campaign’s commitment to fighting for a living wage of at least $15.00 an hour,” the letter continues, “we believe it is only fair that the campaign would carry through this commitment to its own field team.”

According to the Post, field organizers claim that their long hours working on behalf of Sanders drop their actual pay to about $13 per hour.

“Many field staffers are barely managing to survive financially,” the union letter says, “which is severely impacting our team’s productivity and morale. Some field organizers have already left the campaign as a result.”

Socialism isn't about ‘the people', it's about the people at the top. It's easily demonstrable that enforcing a minimum wage closes businesses – and that's at the heart of a socialist agenda – to cause capitalism to fail.

Nearly 1 out of 10 restaurateurs in areas with a recently increased minimum wage have closed an operation since the cost hike, and 71% have attempted to pass along the rise to customers by raising menu prices, according to new research.

The study, based on a survey of 4,000 restaurants and 112,000 employees, also found that 43% of establishments in areas where the minimum was raised have eliminated positions, and 64% have reduced employees’ hours. Roughly 1 in 4—26%—have turned to technology for relief, and 6% have opened commissaries with the expectation that centralized production will be more efficient labor-wise than preparation at the store level.

The research, compiled by management technology supplier Harri, counters the assertion of wage-hike advocates that increases are not as disruptive or financially damaging as the industry contends. They have argued that prevailing wages often already outstrip the mandated minimum pay per hour, that a rise in the pay floor would be a nonevent, and that the industry has repeatedly weathered increases despite its protests and dire warnings of bankruptcies each time.