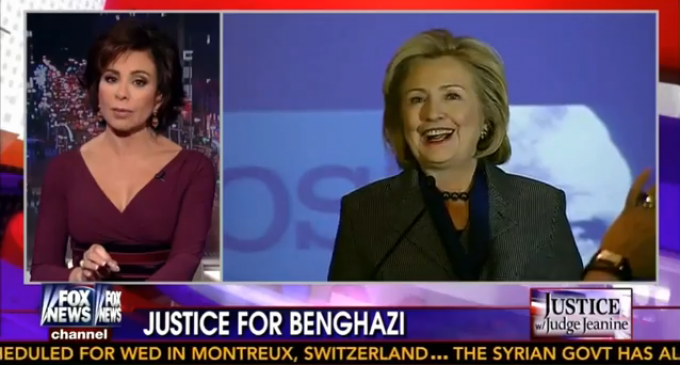 Wow! What a great dressing down of Hillary Clinton by Judge Pirro.

A Senate intelligence committee has issued a scathing report on ‘deaths that were preventable’. It’s clear that the intelligence community provided ample warning. And, despite video evidence of what happened, President Obama went in front of the UN and blamed the incident on an anti-Muslim video as the cause. Clinton, Obama, Rice and others had to agree to conspire to this false narrative.

“People are so afraid of you that your name isn’t even mentioned in the review by the Senate intelligence committee,” states Pirro.

“Everyone on the conspiracy was promoted.”

“What happened in Benghazi was foreseeable. You had a duty and a responsibility. They relied on you. They asked you for safety and security and you not only breached that duty, you breached the public trust…”