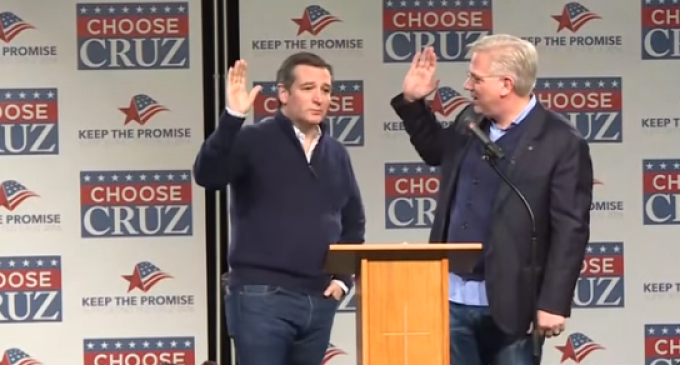 Glenn Beck has been on a long ride into the sunset these past five years. After so many years of being genuinely funny on the radio, it is shocking to see today's desperate activist for… anti-Trumpism?

What is Glenn Beck these days? Other than the second choice endorsement for Ted Cruz.

Now, perhaps because he felt betrayed, Ted Cruz holds up the Beck endorsement as a slap in Palin's face. Just months ago, Beck was declaring Sarah Palin has become a clown. He later said he regretted it but the clown meme was picked up with glee by the left and ot now follows Sarah Palin all around Google thanks to Glenn Beck.

For all the talk about Cruz wanting Sarah Palin on board, his staff didn't seem too concerned about bringing in the guy who called her a clown and said he was embarrassed by his former support for her.

Beck, who has spent months trying convince everyone that Donald Trump was a secret agent for Hillary Clinton, pulled off a stunt in Iowa by administering a mock oath of office to Sen. Ted Cruz.

Cruz got the oath wrong.

Which is fitting, because he is getting a lot wrong these days.

Please see the next page for details on the Beck Cruz mock swearing in: