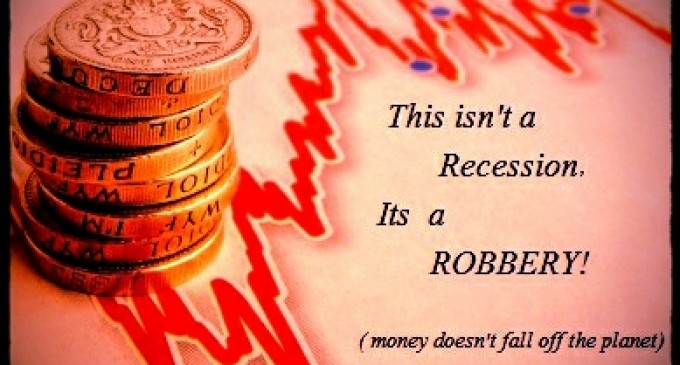 Are you ready to ‘do your part’ to save America by paying the bank for the privilege of holding your money?

This seems to be the next gov’t con coming down the pike.

The Federal Reserve (that private banking cartel that controls our nation’s monetary policy without oversight), has been talking about tapering for a while now. It stated in the last FOMC minutes that it could start tapering as early as December, offering some other conditions to ease the pressure on banks.

The banks’ response is that it would start charging people to deposit money in their banks.

See, the Federal Reserve IS the banks. So, the banks are literally talking to themselves in a dog and pony show for your entertainment, or rather, for public propaganda.

Basically, the banksters won’t be happy until they steal all the money they can and this is just another vehicle with which to do so.

The Fed’s Catch 22 just got catchier. While most attention in the recently released FOMC minutes fell on the return of the taper as a possibility even as soon as December (making the November payrolls report the most important ever, ever, until the next one at least), a less discussed issue was the Fed’s comment that it would consider lowering the Interest on Excess Reserves to zero as a means to offset the implied tightening that would result from the reduction in the monthly flow once QE entered its terminal phase (for however briefly before the plunge in the S&P led to the Untaper). After all, the Fed’s policy book goes, if IOER is raised to tighten conditions, easing it to zero, or negative, should offset “tightening financial conditions”, right? Wrong. As the FT reports leading US banks have warned the Fed that should it lower IOER, they would be forced to start charging depositors.

In other words, just like Europe is already toying with the idea of NIRP (and has been for over a year, if still mostly in the rheotrical and market rumor phase), so the Fed’s IOER cut would also result in a negative rate on deposits which the FT tongue-in-cheekly summarizes “depositors already have to cope with near-zero interest rates, but paying just to leave money in the bank would be highly unusual and unwelcome for companies and households.”

If cutting IOER was as much of an easing move as the Fed believes, banks should be delighted – after all, according to the Fed’s guidelines it would mean that the return on their investments (recall that all US banks slowly but surely became glorified, TBTF prop trading hedge funds since Glass Steagall was repealed, and why the Volcker Rule implementation is virtually guaranteed to never happen) would increase. And yet, they are not:

Executives at two of the top five US banks said a cut in the 0.25 per cent rate of interest on the $2.4tn in reserves they hold at the Fed would lead them to pass on the cost to depositors.

Banks say they may have to charge because taking in deposits is not free: they have to pay premiums of a few basis points to a US government insurance programme.

“Right now you can at least break even from a revenue perspective,” said one executive, adding that a rate cut by the Fed “would turn it into negative revenue – banks would be disincentivised to take deposits and potentially charge for them”.

Other bankers said that a move to negative rates would not only trim margins but could backfire for banks and the system as a whole, as it would incentivise treasury managers to find higher-yielding, riskier assets.

“It’s not as if we are suddenly going to start lending to [small and medium-sized enterprises],” said one. “There really isn’t the level of demand, so the danger is that banks are pushed into riskier assets to find yield.”

All of the above is BS: lending has never been a concern for the Fed because if it was, then one could scrap QE right now as an absolute faiure. Recall that as we showed recently, the total amount of loans and leases in commercial US banks has been unchanged since Lehman, with the only rise in deposits coming thanks to the fungible liquidity injected by the Fed.

Furthermore, contrary to what the hypocrite banker said that “the danger is that banks are pushed into riskier assets to find yield”, banks are already in the riskiest assets: just look at what JPM was doing with its hundreds of billions in excess deposits, which originated as Fed reserves on its books – we explained the process of how the Fed’s reserves are used to push the market higher most recently in “What Shadow Banking Can Tell Us About The Fed’s “Exit-Path” Dead End.”

What the real danger is, is that once the Fed lowers IOER and there is a massive outflow of deposits, that banks which have used the excess deposits as initial margin and collateral on marginable securities to chase risk to record highs (as JPM’s CIO explicitly and undisputedly did) that there would be an avalanche of selling once the negative rate deposit outflow tsunami hit.

Needless to say, the only offset would be if the proceeds from the deposits outflows were used to invest in stocks instead of staying inert in some mattress or, worse (if only from the Fed’s point of view) purchase inert assets like gold or Bitcoin.

Which brings us back to the first sentence and the Fed’s now massive Catch 22: on one hand, shoud the Fed taper, rates will surge and stocks will once again plunge, as they did, in early summer, just to teach the evil, non-appeasing Fed a lesson.

On the other hand, should the Fed cut IOER as a standalone move or concurrently to offset the tapering pain, banks will crush depositors by cutting rates, depositors will pull their money from banks en masse, and banks will have no choice but to close on a record levered $2.2 trillion in margined risk position.