When Muslim terrorist Omar Mateen murdered 49 gay and lesbians at a club and wounded dozens more last weekend, it was immediately apparent, due to his conversations with 911 while he was holed up in the club that he was an Islamic terrorist, and that he had some kind of issue with gays and lesbians. He stated his allegiance to ISIS and Abu Bakr al-Baghdadi to the 911 operator. He was killed when police stormed the club, but in the ensuing week, there were signs that he could very well be homosexual, since his ex-wife made that claim and he had visited the gay club and gay websites repeatedly.  He is and was, in fact, human trash who deserved no sympathy or understanding.  It was clear that his primary motivating factor was his commitment to Jihad and radical Islam, a group that throws gay people off the tops of high rise buildings. So it was shocking when Attorney General Loretta Lynch indicated over the weekend that a transcript of his conversation with the 911 operator and negotiator would be released, but that it would excise all mention of his Islamic motivation and his commitment to radical Islam. Those words would be erased so as “not to give his radical tendencies voice.”

It was one of the most absurd statements ever, especially since anyone paying attention knew what he had said. Of course there are still idiot Democrats who truly are ignorant and clueless, and amazingly, a survey of Democrats questioned about the mass murder reported that 60% of them attributed the massacre to guns and Republicans rather than radical Islam. These are the true Obama followers. Sadly, these people also vote if they can find the voting location. The rest of the nation, however, was outraged and demanded full disclosure. Here is a summary of what happened after that.

In an interview with NBC's Chuck Todd, Attorney General Loretta Lynch says that on Monday, the FBI will release edited transcripts of the 911 calls made by the Orlando nightclub shooter to the police during his rampage.

FBI Director James Comey said at a press conference that the shooter’s past comments about Islamist groups were “inflammatory and contradictory.”

“We see no clear evidence that he was directed externally,” the president added. “It does appear that at the last minute, he announced allegiance to ISIL. But there is no evidence so far that he was in fact directed by ISIL, and at this stage there’s no direct evidence that he was part of a larger plot.” ISIL is another name for ISIS, or the Islamic State.

LORETTA LYNCH: What we're announcing tomorrow is that the FBI is releasing a partial transcript of the killer's calls with law enforcement, from inside the club. These are the calls with the Orlando PD negotiating team, who he was, where he was… that will be coming out tomorrow and I'll be headed to Orlando on Tuesday.

CHUCK TODD: Including the hostage negotiation part of this?

LYNCH: Yes, it will be primarily a partial transcript of his calls with the hostage negotiators.

CHUCK TODD: You say partial, what's being left out?

LYNCH: What we're not going to do is further proclaim this man's pledges of allegiance to terrorist groups, and further his propaganda.

Anyone who believes that Lynch was proposing this plan of obfuscation on her own needs a reality check and a big ol' slap upside the head. This directive came straight from Obama, and it reinforces the fact that he is determined to cover for a religion he is sympathetic to or belongs to. Even the main stream media could not walk back this attempt to cover what the shooter believed and explain away the nonsensical position of Lynch. Even Paul Ryan was incredulous about the attempted coverup.

After outcry from Speaker of the House Paul Ryan, as well as political commentators, the FBI has reversed course and released the full transcript of the 911 phone call between police and the Orlando terrorist, Omar Mateen.

Speaker Ryan said Monday: “Selectively editing this transcript is preposterous. We know the shooter was a radical Islamist extremist inspired by ISIS.”

Lest there be any question about what was said, below is a portion of the actual transcript, although even this version changes some words. For example, when Mateen mentions Allah, the transcript changes it to God. They are not the same, and clearly the politically correct government agency, whether the corrupt Justice Department, or the even more corrupt White House, it is clear that their attempt at whitewashing the guilt of radical Islam from this tragedy did not work. What is clear, however, is that this administration is corrupt from the top down and is more interested in screening the religion from any judgement or fault than it is in protecting the American people from Islamic terrorism. That is both tragic and terrifying. 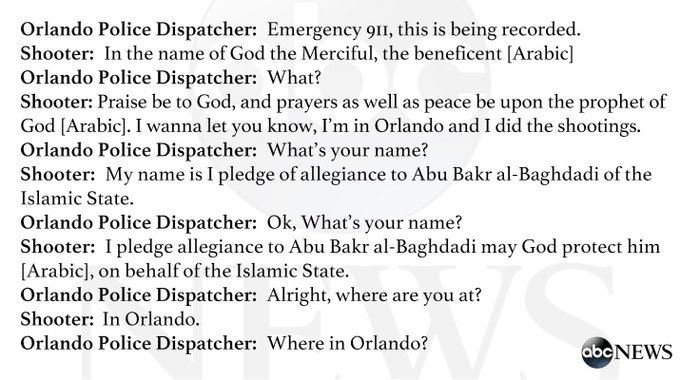