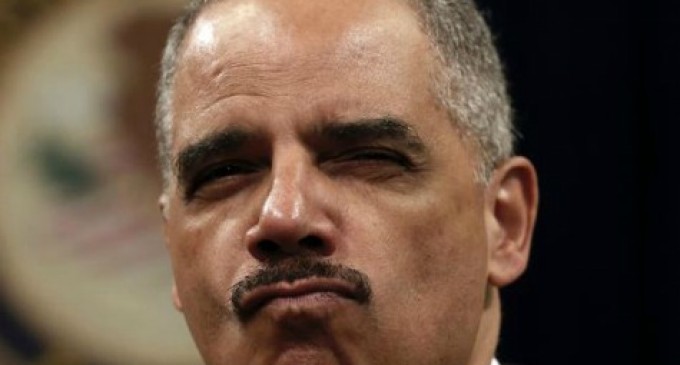 Our Attorney General, Eric Holder, can't explain how the Constitution allows Obama to take the ‘executive actions' that he does.

Of course, Obama's executive orders are unprecedented in their overreach and definitely violate the Constitution.

Holder: Obama consults the Justice Dept. to make sure his actions are Constitutional
Lee: Then exactly how does Obama's action of delaying the employer mandate in Obamacare fit into the Constitutional guidelines on executive orders
Holder: I dunno

Basic constitutional law seems to be a bit beyond our Attorney General, at least when asked if Obama has broken the law.

Attorney General Eric Holder flubbed a question from Sen. Mike Lee (R-UT) that is of vital importance to the rule of law.

While the Constitution allows – and sometimes requires – executive action on many matters, President Barack Obama has asserted executive authority in unprecedented ways. When Lee asked why one of Obama’s orders does not violate the Constitution, Holder – the chief legal officer of the nation – had no answer.

During a Senate oversight hearing, Lee asked Holder by what legal authority Obama suspended Obamacare’s employer mandate, which covers all companies with 50 or more employees. Holder admitted that he had no ready answer, that there were legal memos on this subject, but that he could not recall what they said. Lee sharply criticized this lack of an answer and requested that Holder provide to the committee copies of the legal memos making the case for Obama to be able to do this.

Video shows the details of the exchange, in which Holder said the President was on the strongest footing of taking action that changes the law governing the country.

Article II, Section 1 of the Constitution specifies the oath a person must take before he can exercise the powers of the presidency. As Obama has said twice, “I, Barack Hussein Obama, do solemnly swear that I will faithfully execute the Office of President of the United States, and will to the best of my Ability, preserve, protect and defend the Constitution of the United States.”

There are two elements: faithful execution and upholding the Constitution. Article II, Section 3 then explains what faithfully executing the office means, specifically imposing upon each president the duty that “he shall take Care that the Laws be faithfully executed.” This means the president will adhere to each provision of the Constitution, enforce and administer all federal statutes and treaties, and defend those laws if they are challenged in court.

As I explore in my academic work “Take Care, Now,” forthcoming this spring in the Harvard Journal of Law & Public Policy, the Framers of the Constitution included the Take Care Clause to address a profound threat to a nation under the rule of law. The British king would sometimes exercise what was called the Royal Prerogative, whereby he would simply decline to uphold certain provisions of an Act of Parliament when he decided enforcement was unwarranted, or when it became politically inconvenient.

That is what Obama is doing. As my previous reporting explains in greater detail, the employer mandate is essential to the entire Affordable Care Act's running as it is designed, and it does not permit anyone – including the president – to alter its requirements or waive its penalties.

The Take Care Clause requires the American head of state to carry out every Act of Congress adopted by the American people’s elected legislators. It also requires the president to obey every provision in the Constitution, giving full force to all of its powers and never stepping beyond any of its limitations.

Executive orders are more than just allowed by the Constitution; they are required by it. That’s because they are the means whereby presidents instruct their department heads and agencies specifically how to carry out certain programs and administer provisions in certain laws. They are part of faithfully executing laws made by Congress.

However, they are not presidential lawmaking, because that would be illegal. Article I, Section 1 of the Constitution provides that all legislative power is vested in Congress alone. Congress makes the laws, and the president enforces those laws. He can never make those laws.

It is even worse here, as Obama is lawmaking by negative. As I’ve previously written, you completely rewrite – or completely nullify – a law if you decline to enforce certain provisions in that law.

Similarly, executive agencies have always issued regulations to implement federal laws. In fact, many executive orders are nothing more than a president's ordering an agency to develop new regulations to do a more effective job of carrying out a federal law. Those regulations carry the force of law.

Ever since FDR’s New Deal, new agencies have promulgated regulations that are substantive rather than just procedural. They look like mini-laws, instead of a play-by-play manual of how-to steps for carrying out Congress’s laws. For the past 80 years, the Supreme Court has struck down regulations that cross the line into lawmaking, and courts will regularly interpret regulations however narrowly is necessary to keep them within the boundaries of what Congress has authorized.

Obama has taken the problem of executive overreach to a new level, however. At least, even with federal regulations, an agency must go through a long process of public notice and receiving public comment before issuing regulations, and those rules can be taken to court under the Administrative Procedure Act, and “set aside” by the court if those regulations are “arbitrary or capricious,” “in excess of statutory jurisdiction, authority, or limitations,” or “otherwise not in accordance with law.”

By contrast, Obama is simply declaring things to be laws through executive orders that are not authorized by any Act of Congress. It fits a larger pattern, such as his agencies' claiming the power to tell churches whom their ministers and leaders will be, proclaiming the U.S. Senate to be in recess when the Senate is in session so that Obama can make top-level appointments without Senate approval, and ordering Christian companies and Catholic charities to offer healthcare related to abortion. It is lawmaking through executive fiat.

Yet Holder cannot explain why the Constitution does not forbid what Obama is doing, or instead if Obama has actually created an imperial presidency. By not even having an answer ready, one has to wonder if he even considered this critically important question.