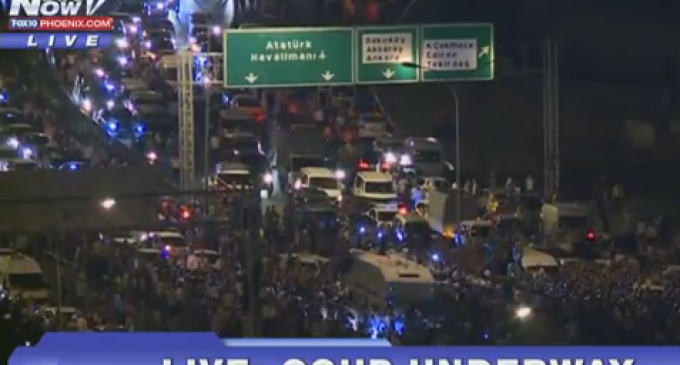 Although a Turkish national intelligence spokesman has claimed that the today's coup has been repelled, the military claims that is has seized full control of the government.

This is not only sending “shockwaves through NATO and the Middle East”, but it has “baffled many in the foreign policy community”.

One foreign policy expert, a senior fellow at the Brookings Institute, Omar Taspinar, has for months warned against a military coup.  He believes the “most dangerous risk” will be the breakout fighting between the divisions inside the civilian and intelligence factions aligned with re-elected president, Recep Tayyip Erdoğan and the Turkish military.

Professor Omer Taspinar declared, “This will rattle the Turkish markets. It will tarnish the country’s image … This will be embarrassing for Erdoğan.”

A curfew has been proclaimed across the country, with marital law in effect; all the while, the citizens of Istanbul have quickly taken cover indoors as military jets fly over the city.

Turkish President Erdoğan is a destabilizing force in this part of the world, as he has of recent made threats against Jerusalem.

Erdogan, has declared (sic) the Islamic desire to conquer Jerusalem. This desire to retake Jerusalem is the same sentiment that the Muslims of the Middle Ages were fighting to fulfill. Now that Turkey wants to pursue this very same conquests, it is obvious that we are going back to Medieval Times. They are praising Saladin who fought a very fierce battle with Richard the Lionheart in the Battle of Acre, in which the Christians won, and who defeated the Christians in the Battle of Jerusalem, and they are also speaking of the Battle of Gallipoli, in which the Muslims defeated the Christian English.

Erdogan made more revealing statements on going back to the Crusades, declaring that he communicates with the soul of Saladin (which is necromancy), going so far as to say that he was in the presence of Saladin.

The story is fluid of the coup is fluid as Erdoğan declares that the “uprising will be unsuccessful”.

LIVE STREAMING CAN BE FOUND ON THE NEXT PAGE.