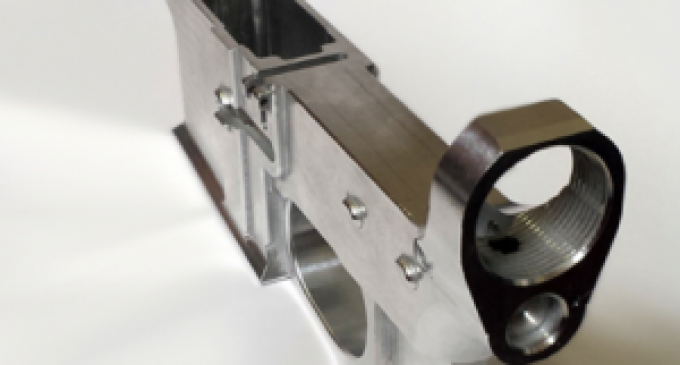 ATF agents raided a gun store yesterday, Ares Armor, in Oceanside, CA, and demanded that they need to turn over a list of 5000 clients or have everything in the store confiscated.

These 5000 clients bought partially built lower receivers for AR-15′s – more commonly known as “80% lowers” in the gun world and are perfectly legal by ATF standards. However, recently the store sold a plastic version the ATF finds particularly offensive because it shows the customer how to build with greater ease.

These ‘lower receivers’ are legally sold without registration or serial numbers, which is the problem for the ATF and the feds: how do you confiscate that which is not registered?

The gun store has filed a restraining order against the ATF after the raid – so they are held off, for now.

OCEANSIDE, Calif. – The owner of an Oceanside store that sells various gun parts to build a rifle from scratch refused to turn over his customer list when he was raided by federal agents Wednesday.

Dimitrios Karras, owner of Ares Armor, said the Bureau of Alcohol, Tobacco, Firearms and Explosives agents were investigating their business, not for what they sell, but for the people who purchase their products.

Karras said the ATF threatened to shutter their business if they didn’t hand over the names of 5,000 customers who have purchased an 80 percent lower receiver (the base) for building an AR-15.

It is legal to build a rifle from scratch without serial numbers only if the base is manufactured to ATF specifications.  The base is not considered a firearm if it’s sold separately.

A manufacturer made an 80 percent receiver in plastic with a different material and colors which show exactly where the customer can drill making it easier and cheaper to build.  The ATF said it is illegal.

The ATF sent stores, including Ares Armor, letters demanding they turn over the products and names of customers who purchased them.

“They said either give us these 5000 names or we are coming in and taking pretty much anything – which is a huge privacy concern and something we are not willing to do,” said Karras.

Karras’s attorney informed the ATF to pick up the receivers Wednesday morning at their Oceanside location, but the inventory was not the issue. The store owner said he will not comply with turning over their private client list.

“They were going to search all of our facilities and confiscate our computer and pretty much shut our business down,” said Karras.  “The government invades our privacy on a daily basis and everyone thinks its ok. This is one of those situations where hopefully the governmental institutions will come in say this is protected and no you’re not taking it from them.”

In anticipation of a raid, they filed a temporary restraining order against the ATF, stopping them from confiscating their property, Karras said.  The ATF has a certain amount of time to respond. If the two parties do not reach a compromise, they will be in court for a preliminary hearing March 20.