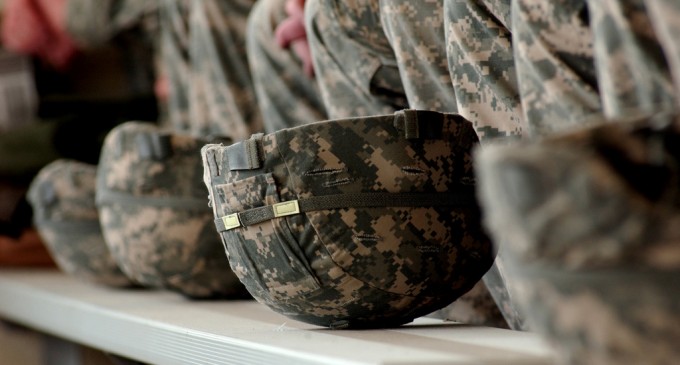 An ‘Equal Opportunity Officer’ has told soldiers at Camp Shelby that they can’t say the word Christmas, that they should use the word ‘holiday’ instead.

Do you think if they wanted to use other religious words from Islamic or Jewish faiths they would have been told something similar?

That’s the message that was conveyed to a group of soldiers at Camp Shelby by an equal opportunity officer from the Defense Equal Opportunity Management Institute, according to a soldier who attended a recent briefing.

“It’s unbelievable that the Army would ban ‘Christmas’ like it’s a bad word,” said Michael Berry, an attorney with the Liberty Institute, a legal firm representing the unidentified soldier.

Two weeks ago, a routine meeting was held at the Mississippi base with various leaders of the 158th Infantry Brigade. During the meeting, they discussed an upcoming Christmas football tournament. The equal opportunity officer immediately objected to the usage of the word “Christmas.”

The soldier said there was a brief, but heated discussion about political correctness. At one point, the equal opportunity representative tried to deflect the criticism by pointing out it was the Army’s rules – not hers.

So what does the Army have to say about the DEOMI officer’s edict?

“There is no policy at the 158th Infantry Brigade, First Army Division East or First Army that forbids using the word ‘Christmas’,” Public Affairs Chief Amanda Glenn told me.

She confirmed that there was a discussion in the meeting about the football tournament. She said it was meant to be a team building event and it had no tie to a specific religious event or holiday celebration.

“The Equal Opportunity advisor simply stated that it would be more appropriate to call it a holiday football event,” she said.

But Attorney Berry tells me that it was made very clear to the soldiers in the room that the name change was not merely a suggestion.

“She stated that the word Christmas had to be replaced with the word holiday,” Berry said.

The soldier who contacted me said it was just another instance of the military trying to curtail public expressions of the Christian faith.

Berry said it’s a shame that the Army has implemented word police.

“Are they going to have the ‘Merry Christmas’ police going around issuing citations to an soldier who slips and says the word?” he wondered. “They’re treating Christmas like it’s pornography. As a matter of fact, the Army actually treats pornography better than it does Christmas.”

It’s not the first time Equal Opportunity officers have caused trouble at Camp Shelby. Earlier this year, I reported exclusively about a briefing at Camp Shelby that labeled the American Family Association as a domestic hate group.

After my story was published, the Secretary of the Army ordered military leaders to halt all briefings on extremist organizations that labeled Evangelical Christian ministries as domestic hate groups.