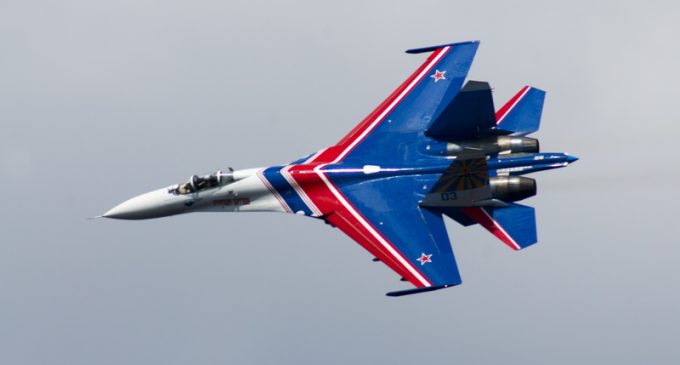 A Russian fighter jet approached a U.S. Navy reconnaissance aircraft over the Black Sea on Tuesday, coming within a mere 20 feet (about two car-lengths) of the Navy plane.

While that's literally a close encounter, by all accounts from Department of Defense officials, it was a common maneuver associated with what Russian military officials call a “greeting” approach.  This tactical maneuver was engaged because the Navy aircraft, a P8-A Poseidon, was fast approaching the Russian airspace over that body of water, a relatively new acquirement for them, courtesy of Barack Obama.

It wasn't that long ago that Russian President Vladimir Putin ordered a military build-up along the borders of Ukraine, eventually spilling over into an all-out “soft invasion” of the former-Soviet Union state.  The Ukranian president implored the United Nations and the U.S. to intervene, but the strongest method of intervention on the part of the Obama administration was a condemnation of the Russian action.  Soon after, Obama washed his hands of the situation, patted himself on the back for a job well done, and waited by the phone for another call from the Nobel Peace Prize committee.

Meanwhile, the Ukraine people endured months of terrorizing at the hands of masked and heavily armed Russian forces, pushing slowly into the country, day after day, until they were at the very border of the capital.  All the while, Putin shrugged his shoulders and claimed he didn't know whose troops those were.  And that was that.

The forces moved into adjacent Crimea and in the twinkling of Obama's eye, that region capitulated and became, once again, a Russian territory.  Putin claimed that the Crimean people wished to be part of Russia once again and he merely acceded to that request after an impromptu meeting with Crimea's leaders.  At this point, Russia (once again after decades) had full and easy access to the inner channels of the Black Sea.  It is an important strategic area for both Russia and the United States.

These encounters are meant as a gentle (and ominous at the same time) reminder that Russia is not afraid to patrol its waters and territory.  The Su-27 Russian fighter jet was armed with six air-to-air missiles, which is unusual for encounters of this nature.  Typical these occur without armed aircraft.  But Putin is no stranger to veiled threats.  For instance, just a days ago, he was at a hockey game in Sochi which lies directly on the border of Georgia.  If you recall, in the opening weeks of George W. Bush's first term in office, Putin threatened invasion of that country.  In response, Bush sent U.S. warships to the Black Sea for “military exercises” and the invading Russian army immediately pulled back out of Georgia.  Don' think for a second that Putin doesn't think about that incident years ago.  The rebuilding of the old Soviet Union is still foremost in his mind and Georgia was a key to that rebuilding.

Naval officials reiterated that there was no need to be alarmed about this encounter, however.  They explained that this tactic was normal for these situations.

In February, Russian fighter jets buzzed a U.S. Navy destroyer in the Black Sea on the same day the U.S. Army unloaded dozens of tanks and hundreds of soldiers in a nearby Romanian port along the Black Sea.

This same Navy destroyer, by the name of USS Porter.  If that sounds familiar, its because just recently, it was instrumental in the Syrian assault.  Coincidence? Let's look at more details on the second page: