Actress and Playboy model Natacha Jaitt claimed to have proof of a VIP paedophile ring. Months later after tweeting that she would be killed, she was found dead.

According to the Buenos Aires Times, a local news outlet in Jaitt’s home country of Argentina, Jaitt’s body was found in a bed at the Xanadú party salon in La Ñata, in the Tigre district, north of Buenos Aires City, police confirmed.

Police are currently looking into the circumstances of the 41-year-old mother of two’s death, including interviewing those last seen with her in the hours before she died.

According to local media, Jaitt was found naked in a bed at the night club with cocaine residue in her nostrils along with traces of LSD and liquor in her system.

In 2018, Jaitt had made explosive allegations that dozens of high-profile sports and entertainment personalities were involved in an underage prostitution ring. Indicating she feared for her safety, she once went as far as to warn via Twitter that she could pay the ultimate price for revealing dirty information she had on some of the country’s rich and famous.

After making these allegations of child sex rings, Jaitt made several television appearances and noted that she received death threats and a slew of backlash. This prompted the former model to go on Twitter to let people know that she would never harm herself.

“WARNING: I am not going to commit suicide, I am not going to take too much cocaine and drown in a bath, or shoot myself. So if this happens, it wasn’t me. Save this Tweet,” she wrote in April, 2018 according to a translation from the Times. Just last month, Jaitt accused film director Pablo Yotich and a friend of his of raping her.

Jaitt’s brother said that his sister did not take drugs as a result of advice from doctors who warned her of serious consequences if she mixed them with medication she was on.

According to police, they have not yet ruled out foul play, but did note that Jaitt’s body showed no signs of violence.

In the video below, Jaitt names pedophiles and describes the networks. It was after this that she began getting death threats and made the tweet above.

At 4:13 – 7:07: Jaitt directly states that Gustavo Vera—the president of Argentina—is a pedophile and runs a trafficking network. And that he uses his organization La Alameda to shut down his competition.

Then, at 8:49 – 9:51: Jaitt recounts how the pope himself saved a pedophile priest and relocated him to a new area where he had access to vulnerable children.

This case is eerily similar to that of Mark Minnie, author of the controversial book ‘The Lost Boys of Bird Island’ who devoted his post-police life to exposing the corruption and horrifying pedophilia he discovered while working as a detective. Minnie and his good friend Chris Steyn, also a former cop turned investigative journalist, worked together on the book to expose a government and business community who took children to Bird Island where they were abused, and some possibly murdered.

Last year, after publishing the book, Minnie was found shot in the head. While officials are calling it an apparent suicide, like Jaitt’s family, Minnie’s family is claiming that he told them he would never kill himself and that people were after him because he was about to expose even more high-level government pedophilia. 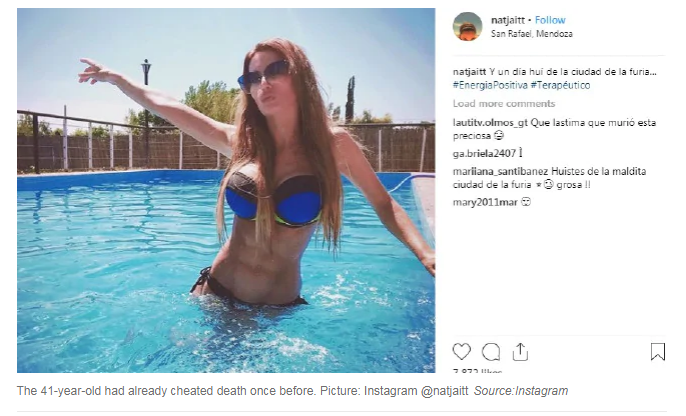 She is also believed to have implicated a close friend of Pope Francis in the alleged paedophile ring.

But while local news outlets have reported autopsy results showed Ms Jaitt suffered multiple organ failure with no sign of violence, her brother claims she wouldn’t have taken drugs as they would have reacted to medication she had just started taking.

He and Ms Jaitt’s lawyer are convinced the death was likely murder and not an overdose, and police are now investigating the case and interviewing other people who were at the party with the actress.

Ms Jaitt, who rose to fame after leaving Argentina for Spain with just $10 to her name, survived a violent mugging that led to her being stabbed in the neck by a teenage criminal in 2016.

And in recent months, she also claimed to have been raped as well as receiving threats on her life.

“She knew the risk she was putting herself at. I’m not a big conspiracy person but … are we really expected to believe that she uncovered this and then just mysteriously killed herself?” one Reddit user asked, while another added: “It must be hard to have info about something so serious yet so sensitive that people might not believe you and if they do you might be killed for it. The world seems like it’s just getting darker and darker.”