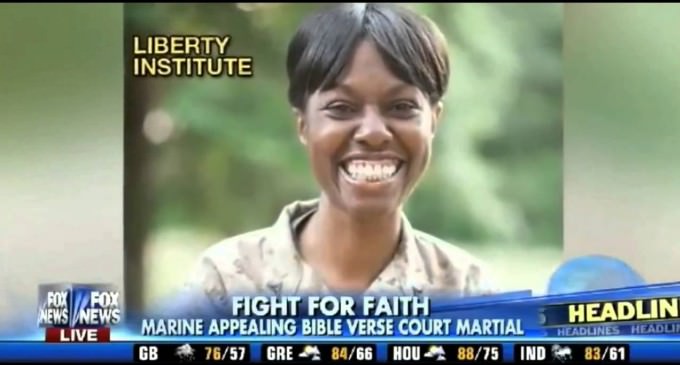 Obama's persecution of Christians in the military just gained validation as the U.S. Court of Appeals for the Armed Forces rejected Lance Corporal Monifa Sterling religious freedom case.  In a 4-1 ruling that stated that, “We reject the argument that every interference with a religiously motivated act constitutes a substantial burden on the exercise of religion”, Sterling's case will now go before the Supreme Court.

Lance Corporal Monifa Sterling was court-martialed, at Camp Lejune, in North Carolina, because she refused to remove a Bible verse from her computer desktop.

She refused to capitulate to the demands to give up her religious freedom, when she stood her ground and would not remove the verse that reads, “No weapon formed against me shall prosper.”

The Marine Corp felt this verse must be deleted as it “could easily be seen as contrary to good order and discipline”.  The U.S. military was founded by men who fought for the right to worship God, pray and read the Bible.  General George Washington prayed for his troops and yet we have a Commander-in-Chief who actively supports the suppression of religious freedom.

The charges that will forever tarnish her record are that of ‘bad conduct and dishonorable discharge.”  Yet Sterling, who stood her ground for her faith, refusing the remove, “No weapon formed against me shall prosper”, has a stronger advocate in her corner, based on the Truth of this verse.

The rest of the court ruling can be found on the next page.