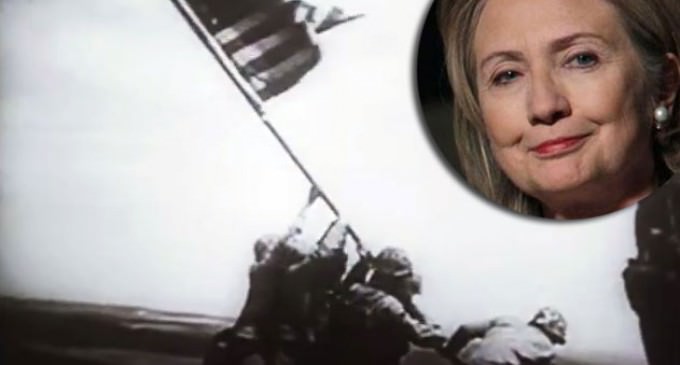 With her poll numbers tanking, Hillary Clinton's fancy new campaign promotion video attempts to distract from real issues in favor of a Democrat favorite made-up issue: the need to spend more of your tax dollars to fight climate change. This may be a good choice for Clinton, since her popularity outside her core supporters is flagging and people are beginning to notice her refusal to engage on any important issues.

But nestled in a montage partway through the new video (see it after the break) is a peculiar choice of imagery. Clinton appears to be suggesting that the expensive and ultimately fruitless struggle to control climate change is as noble and heroic as the American victory on Iwo Jima that involved the deaths of thousands of Marines.

Watch for the montage at about 1:50 in the clip. It's bad enough she tarnishes other exceptional American achievements with her climate-change claptrap, but that comparison is the most appalling of the bunch.

Check out the video on the NEXT PAGE.