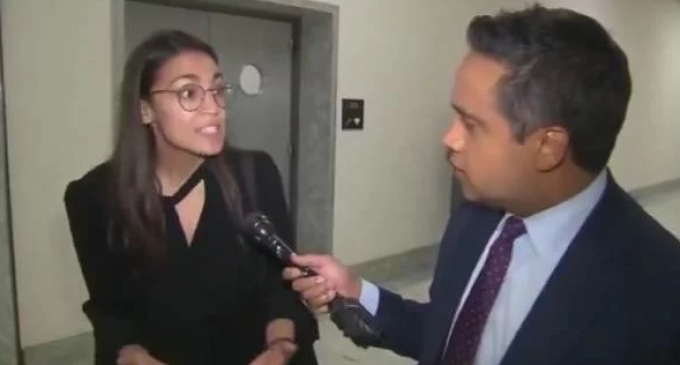 The feud between freshman congresswoman Alexandria Ocasio-Cortez and House Speaker Nancy Pelosi continues to heat up.

Earlier this week AOC accused the Speaker of loading her up with menial work to keep her ‘busy.'

“I was assigned to some of the busiest committees and four subcommittees,” the rookie congresswoman told The New Yorker Radio Hour Tuesday. “So my hands are full. And sometimes I wonder if they’re trying to keep me busy.”

Why wonder? It would seem to be your job AOC, not to run around making headlines with outrageous lies easily proven false, like your comments that migrants were drinking out of toilets. If you are being kept ‘busy', perhaps you should take the hint – and opportunity to reflect a bit.

Pelosi didn't take too kindly to the accusation.

A day later, Pelosi highlighted the apparent rift between progressive and moderate Democrats, when she reportedly dished up a closed-door scolding over online trash-talking.

“So, again, you got a complaint? You come and talk to me about it,” Pelosi told Democrats, Politico reported. “But do not tweet about our members and expect us to think that that is just OK.”

To expect AOC to do anything face to face, depriving herself of the opportunity to grab the spotlight, is just wishful thinking.

When asked about the ongoing feud, the Speaker offered a terse response, saying that the rest of her caucus was fully behind her for the stinging rebuke of the four lawmaker rat pack AOC belongs to, known as “the Squad.”

“They took offense because I addressed, at the request of my members, an offensive tweet that came out of one of the member’s offices that referenced our Blue Dogs and new Southern Democrats essentially as segregationists,” Pelosi continued, referring to a since-deleted tweet by an AOC staffer.

AOC doubled down on the inference that Pelosi was engaging in racism when confronted by a CNN reporter. Check out the video below.