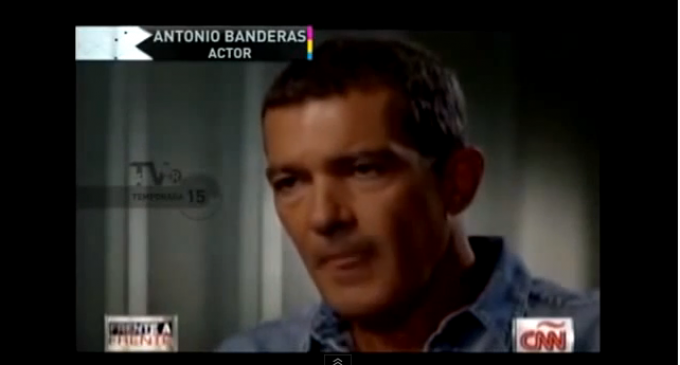 According to Antonio Banderas, the answer to our corporate-owned government failures is not to prosecute corrupt politicians, but it's to nationalize corporations, which is another way of saying to end the free market system and dive straight into socialism.

Mr. Banderas says that Chavez got it right.

In an interview with CNN en Español’s Ana Pastor, actor Antonio Banderas cautioned the power corporations have, contending that government takeovers of corporations, “like Chavez did,” are the only answer.

“What other way is there?” the actor questioned.

In the interview, for Pastor’s program Face to Face, Banderas’ political comments are triggering a firestorm of criticism on the net. Echoing the beliefs of the Occupy movement, Banderas says that “you get the sense lately that, possible, in the whole world, we are not being governed by the people we voted for,” indicating that corporations are running the government. He also cautioned that the “lobbies” and corporates he believes are running the government “don’t have to show their face” regardless of their actions.

Having said the problem, Pastor asked Banderas for an answer. “You break it like Chavez did in his time,” he responds. “You say, ‘the topic is over. I’m taking all these corporations and nationalizing them.’” He asks, “What other way out is there?” He additionally praises Chavez by calling this century a “post-democratic era,” and cautioning the inevitable corporate corruption of President Barack Obama. Citing that people expected change with his election, Banderas said he never had hope: “I said ‘no, no, no,’ because he is going to encounter reality.’”

Banderas: You get the sense lately that, possibly, in the whole world, we are not being governed by the people we voted for.

Pastor: Above them, there is something else.

Banderas: The markets, the lobbies, the corporations– there is a lot of hustle there. And, on top of that, people who do not have to show their face to take responsibility for what happens later in governments, in countries.

Pastor: But there is also consent, no? It forms part of the system, the inertia you were talking about. How do you break that inertia?

Banderas: You break it like Chavez did in his time. You say, ‘the topic is over. I’m taking all these corporations and nationalizing them.’ Where is there any other exit? In a time when we have to stand up, a post-democratic era, because really, you listen to Obama during his first campaign for legislature, even his second, and you think– people were saying, ‘this is going to change.’ And I said ‘no, no, no, because he is going to encounter reality.’ And he faced the reality of the markets.