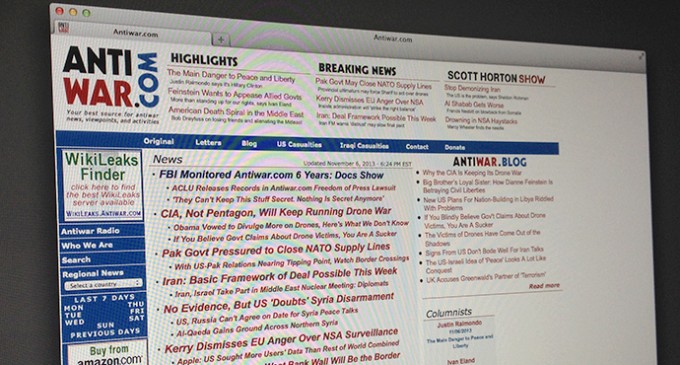 FBI documents obtained under the Freedom of Information Act (FOIA) show the FBI flagged Antiwar.com for surveillance and investigation after it warned the FBI of a possible cyber-threat.

Ed Garris, managing editor of Antiwar.com, notified the FBI that his site had been the target of a hack. “Somehow, months later, the FBI filed Antiwar.com as a potential cyber threat against the FBI, a mistake that lasted for years and effectively gave the FBI the power to monitor the inner workings of the site, which is often critical of US foreign policy.”

“The improper investigation led to Garris and [Editorial Director Justin] Raimondo being flagged in other documents, and is based on inappropriate targeting and sloppy intelligence work the FBI relied on in its initial memo,” Julia Mass, an American Civil Liberties Union attorney in northern California, told The Guardian.

Garris never heard back from the FBI after he notified them of the threat to his site. Years later, Garris discovered mention of the notification in his own FBI files.

“It was pretty scary to think that in my FBI files, and perhaps other government agency files, there was a report that I was considered a threat based on that,” he said. “That may follow me for the rest of my life. Any time I interact with any law enforcement or government agencies, they’re going to be able to see that, and make evaluations of me on it. It’s very scary.”

The Newark, New Jersey FBI office assembled a “threat assessment” report on Garris and Raimondo, noting their anti-war views, recording their articles and media appearances in which the pair espoused critical opinions. Also included are transcripts of articles written by Raimondo speculating that Israel had advance knowledge of the September 11, 2001 terrorist attacks.

“The rights of individuals to post information and to express personal views on the internet should be honored and protected; however, some material that is circulated on the internet can compromise current active FBI investigations,” one unnamed analysts wrote in the report, as quoted by The Guardian. That person added that the site’s source of funding and Raimondo’s true identity were among “several unanswered questions regarding www.antiwar.com.”

The ACLU filed the FOIA request against the FBI, which is known to have monitored an array of nonviolent protest groups and media organizations in the years after 9/11.

“The ACLU brought this case because government surveillance of news organizations undermines democracy and interferes with journalists’ ability to do their jobs,” said Julia Harumi Mass, an ACLU attorney.