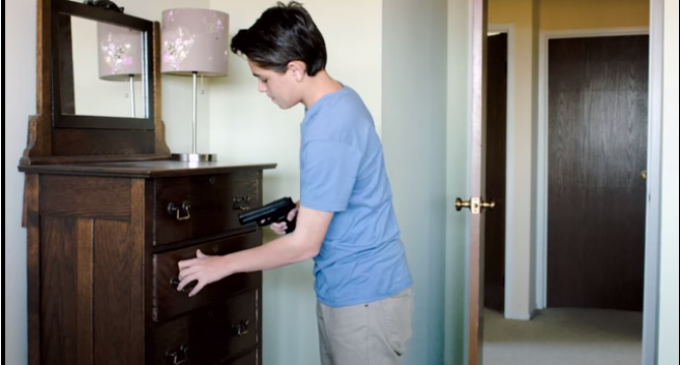 In a PSA created by the San Francisco-based production company, Sleeper 13, children are encouraged to steal their parents gun, take it to school and turn it over to their parents.

This not only encourages children to break several laws, but puts their safety at risk.

The boy is shown opening the drawer to his mother’s dresser, where a handgun is hidden.

The boy takes the gun from the dresser and leaves the room. The ad then flashes to his school. Sitting in a classroom, the boy ventures up to his teacher’s desk after the rest of his classmates have left.

The tension building in the scene breaks, and the boy produces the gun from his backpack, slamming it on his startled teacher’s desk.

“Can you take this away? I don’t feel safe with a gun in my house,” the boy says.

What the ad-makers are encouraging is highly illegal and invites danger.

The boy would be guilty of weapons theft, illegal concealed carry and carrying a weapon on school property.

The ad’s director, Rejina Sencic, took to Twitter to taunt those she says are “afraid to share” her ad.

Lot of people are afraid to share my PSA! If you are not a coward please share https://t.co/q2sisRKCN1 … … #gunviolence

Requests for comment made to Sleeper 13 Productions and to Sincic were not immediately returned.