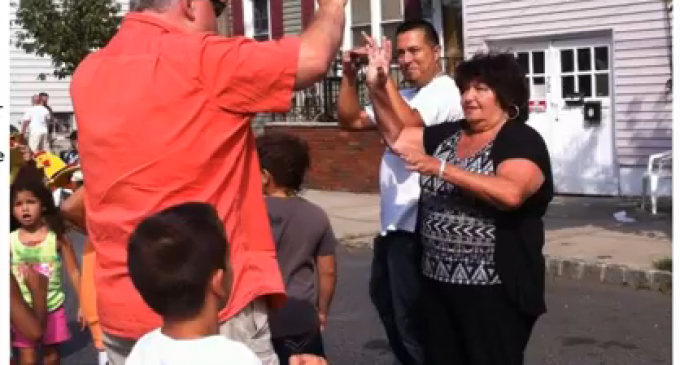 Primeau Forensics Lab in Michigan confirmed with “85 percent” certainty that the voice heard on a phone message is hers.

Can you imagine if a Republican said this?

BELLEVILLE — A Michigan forensics lab has confirmed with “85 percent” certainty that the voice heard on a phone message using a racial slur is that of Belleville councilwoman and mayoral candidate Marie Strumolo Burke.

In the recording, which was posted to YouTube and has been the subject of local discussion for weeks, a woman’s voice that is allegedly Burke’s can be heard yelling in the background of a voicemail left on Councilman Kevin Kennedy’s answering machine.

The former head of the town’s planning board was discussing proposed changes to the town’s tax rates before Burke’s alleged comments on the recording, said Mayor Raymond Kimble, who is running against Burke in the June mayoral election. Kimble said he will call for her resignation.

Burke, a longtime Belleville resident and councilwoman, has repeatedly denied the allegations. In an email to The Star-Ledger, she accused Kimble of engaging in dirty campaign tactics.

“I am outraged and I am ‘100% certain’ that Kimble’s fingerprints are all over this report. We don’t need to pay thousands of dollars to a laboratory to prove that these false accusations lead right back to Kimble,” she wrote.

Kimble said he received the tape in October but did not know when the phone call was placed.

The answering machine was turned over to Primeau Forensics Lab in Michigan last week, said Edward Primeau, the lab’s director. He said he was “85 percent” sure the voice on the tape was Burke’s after comparing the recording to public comments she made at recent town council meetings.

Primeau said Burke’s accents and manner of speaking at council meetings was identical to those of the voice on the recording.

“It’s her. It’s the same person,” he said. “Her speaking style, her pacing. The delivery of all the words spoken in both samples are identical.”

Primeau said he could only rule the voices were “100 percent” identical if Burke were to read the statements made on the phone call aloud, so he could compare them.

“It’s sad to hear that, in the 21st century, in our state, that we have elected officials who have that type of attitude,” said Thomas Puryear, president of the Maplewood-Orange chapter of the NAACP, which represents 11 municipalities. “It lets us know that racism is alive, and unfortunately doing very well, in our state and in our nation.”

Kimble made the lab’s findings public today, calling Burke’s alleged comments “disturbing.” The $1,320 bill for the analysis was paid for by a group of “concerned citizens” led by Thomas Grolimond, according to Primeau.

Grolimond, a member of the town’s Department of Public Works who was hired while Kimble was mayor, said he “helps out” with Kimble’s campaign but is not employed by the mayor.

He also claimed the analysis was not funded or ordered by the Kimble.

Kimble said the pending election had nothing to do with his decision to speak out, and denied any involvement with Grolimond’s actions.

“The tape speaks for itself,” he said.