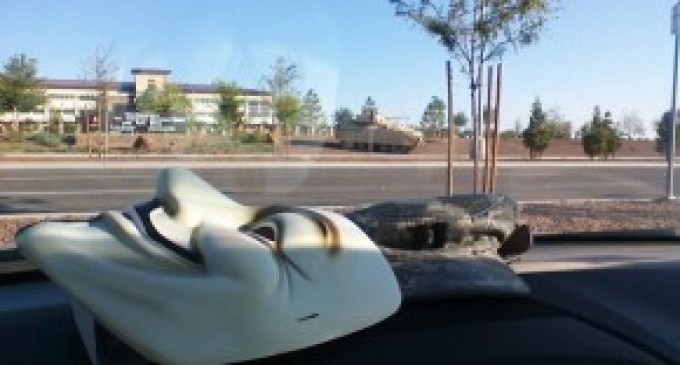 An active-duty Army captain, and member of Anonymous, states that not only are many members of Anonymous inside the military, but they have played an active role in the Arab Spring and are planning more Bradley Manning type leaks.

The captain states that the Army is frightened of new leaks coming out and has a hard time dealing with the presence of Anonymous because the Army is a very top-down organization, while Anonymous is essentially leaderless.

How many more leak will there be? Supposedly, a lot more are coming:

“A lot [of Anonymous members] are mid- to high-rank NCOs. They are well-respected, have connections, and overly large security clearances”, he states “A lot of people who are part of the [Anonymous] culture are just dying at this point for something to come across their table that isn’t already out there. It is so easy to leak information that if you want to, you can do it.”

An active-duty Army captain and member of Anonymous describes how the organization operates, his own involvement in the Arab Spring, how the crackdown on Bradley Manning and Edward Snowden has affected soldiers, and how more leaks are on the way. He has agreed to speak with BuzzFeed on the condition of anonymity.

Are there a lot of members of Anonymous in the Army?
There are more than you would think, more heavily in the techie world [of the military] — especially at Fort Huachuca, where all the intel people are. A lot of them wanted to get the job [there] because they want to learn secret stuff and have a better personal understanding of how the world actually works.

How do you know who is in Anonymous?
Initially we have the handshaking phase. The lingo is still relatively unknown. In conversation, you drop in jokes. If you are with someone on a mission, you’re like, “Man, there are over 9,000 reasons that this is a bad idea.” That initially establishes friendship. Once you feel comfortable with the person and they aren’t just posing as part of the culture, then you talk about what they’ve done and how much a part of it they are. It gets to the point where you are discussing individual operations.

What are the most popular operations amongst soldiers?
Anonymous is so distributed and leaderless that everyone has operations they love and hate. Operation Cartel, especially at Fort Bliss. Operation Dark Net was universally loved. And Operation Payback was pretty well received.

What about you?
I was involved in the Arab Spring opening up internet communications. I was a facilitator for a lot of people who have more skills than me in the cyber world. I knew people who I met through 4chan, 9Chan, and 7Chan and then a lot of AnonOps IRCs and who they needed to talk to — the organizations that would help them, and people in government would give them resources and access — and was able to convince them to talk to people in Anonymous. I got people in the right [internet relay chat] rooms at the right time.

Is that a fair assessment?
All hats are gray. Every white hacker I know has a night job that is very much a black-hat job.

What were the results of what you did for the Arab Spring?
From what I heard they were able to establish ways to assist the activists to have a method where they could get information out of Egypt and have certain Twitter accounts tweet that information on their behalf. But I don’t know for sure. As soon as I was like, “Hey, this is this person,” and vice versa, they did tweet confirmation to make sure that certain Twitter accounts were controlled by certain people, and then I headed out of the room so there would be no “taint” of having a fed there.

Why do Anonymous members outside the military trust you?
My credibility is incredibly suspect in the group. I admit I work for the feds, and I provide information on myself so that they are comfortable. There are people who I only know as screen names but I have put my career in their hands.

What specific actions have other soldiers taken?
There are several [soldiers] I know that probably did things, but I don’t know know that they did. I can legally say, probably under a [lie] detector, I have no proof that they did it. We keep our activities totally separate because at any point in time I can be put in the chair that I can’t lie in. You have to keep the /b/ [4chan’s “Random” board] brotherhood strong.

Does the military know about the Anonymous presence?
Pre-Manning, there were several academic papers put out trying to analyze it and school the leadership. Because the Army is a very top-down organization, they assume that [Anonymous] is too. Leadership wasn’t concerned with it until Manning happened. Then they read everything under the [lens] of what Manning did and it just scared them — scared them blind. They know we are in there and they assume that we are all going to do a Manning or a Snowden.

How have they addressed it?
Every six months you are mandated to get a Threat Awareness and Reporting Procedures Brief. It used to be very much like how to … spot the Iraqi contractor who is pacing off your base. Now it is, “Look at the person at your left and right. Are they espousing social beliefs that don’t line up with Army values? What websites do they go to at work?” With the caveat that it is OK to have political beliefs that are different. You get a heavy-handed feeling.

I have had more than a few officers come up to me and as we are trying to talk about [Anonymous] they are worried, like, “Are you CID [working undercover for the Central Investigative Division]?” Because you always worry about that.

Are the retaliations against Manning and Snowden discouraging Anonymous activity and the desire to leak information?
A lot [of Anonymous members] have been in long enough and are jaded. They are watching as the government comes down harder and harder. There is a growing sense of disdain and hatred because we are complicit in it. There are some secrets that need to be secrets but the stuff [the military] keeps secret just to protect the bottom line — you just feel like you are selling your soul every day. That is a lot of the motivation. Especially for people of the generation that believe that information should be free.