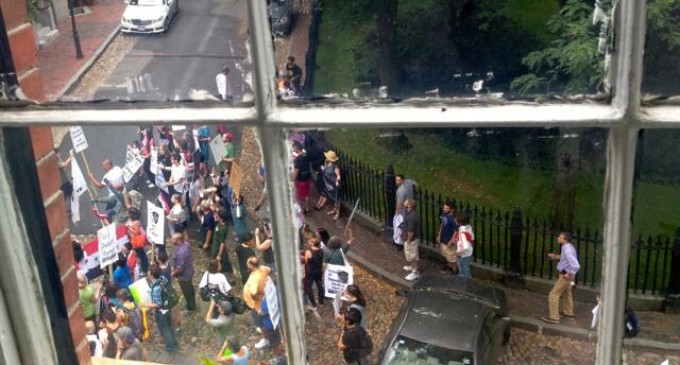 John Kerry presented impassioned anti-war testimony before Congress in 1971, but on Friday he made a speech in Washington, as Secretary of State, laying out his case for going to war with Syria. Anti-war protesters were understandably outraged at this reversal, so they mustered outside his Beacon Hill home in Boston. The group pounded on Kerry's windows and front door, but he was not home. Things have changed since the '70s and nowadays Kerry is usually aboard the “Isabel,” his 76-foot yacht when trouble arises.

In 1971, Kerry said American intervention in foreign civil wars was wrong, no matter how bad they might be because history proves this is the wrong approach:

“The war will continue. So what I am saying is that yes, there will be some recrimination but far, far less than the 200,000 a year who are murdered by the United States of America, and we can’t go around — President Kennedy said this, many times. He said that the United States simply can’t right every wrong, that we can’t solve the problems of the other 94 percent of mankind. We didn’t go into East Pakistan; we didn’t go into Czechoslovakia. Why then should we feel that we now have the power to solve the internal political struggles of this country?

“We have to let them solve their problems while we solve ours and help other people in an altruistic fashion commensurate with our capability. But we have extended that capacity; we have exhausted that capacity, Senator. So I think the question is really moot.”

In 2013, Kerry has a different opinion, saying we must intervene, because history proves this is the right approach:

“But fatigue does not absolve us of our responsibility. Just longing for peace does not necessarily bring it about. And history would judge us all extraordinarily harshly if we turned a blind eye to a dictator’s wanton use of weapons of mass destruction against all warnings, against all common understanding of decency, these things we do know.

“We also know that we have a president that does what he says that he will do. And he has said, very clearly, that whatever decision he makes in Syria it will bear no resemblance to Afghanistan, Iraq or even Libya. It will not involve any boots on the ground. It will not be open ended. And it will not assume responsibility for a civil war that is already well underway.”

No wonder the protesters are angry.

Source: Kerry's testimony before Congress in 1971