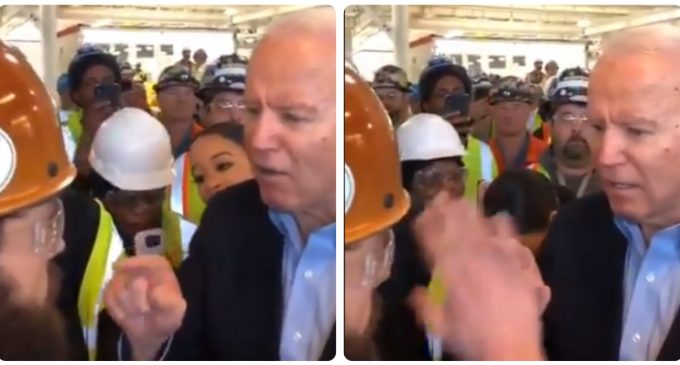 If Joe Biden wasn't a politician he'd be picking himself up off the floor for telling an auto plant worker he'd take him ‘outside' to resolve a heated argument on guns while waving his finger in the man's face.

“You're gonna take away our guns,” the Detroit plant worker told Biden.

Biden immediately responded with the ever-congenial, “You're full of sh**.”

“Shush-shush!” Biden snapped at a woman who tried to interject “I support the Second Amendment.”

The plant worker eventually told Biden that he wasn't okay with the finger being thrust into his face.

You'll surely remember a hostile remark Biden made in 2018 when he claimed that he would “beat the hell out of” President Trump if they were in high school.

“They asked me would I like to debate this gentleman, and I said no. I said, ‘If we were in high school, I'd take him behind the gym and beat the hell out of him,” Biden said in a speech at the University of Miami.

Turn the page to catch Biden's latest attempt to get his butt whooped.