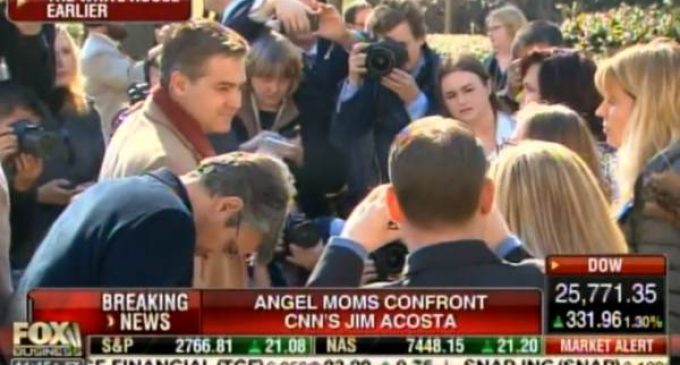 CNN's activist reporter Jim Acosta was surrounded and confronted by Angel Moms after President Trump's press conference on Friday where he announced that he would declare a National Emergency to handle the flood of criminality pouring through our southern border.

At the press conference, Acosta asked Trump if he was ‘concocting a National Emergency in order to get your wall' to which Trump turned to the Angel Moms and asked “What do you think? Am I creating something?” Trump then told Acosta to “ask these incredible women who lost their daughters and their sons.”

Incredibly, even after having been confronted by these women brandishing photos of their loved ones killed by illegal immigrants, during his report from the press conference Acosta referred to Angel Moms as having their children “allegedly killed by undocumented immigrants.”

“We saw people leaving the White House there with photos. Do we know who they are?” anchor Jim Sciutto asked.

“Jim, we believe those are some of the Angel Moms that the president has talked so much about out on the campaign trail, at rallies and so on,” Acosta said. “These are parents of victims who were allegedly killed by undocumented immigrants. The president likes to point to these folks who have been through some terrible experiences as evidence a wall is needed down at the border.”

“I suspect, Jim, if we're seeing some of the Angel Moms coming in, the president is going to be trying to drum up some emotional energy on this occasion here, to try to sell this wall,” he added. “We have seen him do it before.”

Turn the page for details and video.