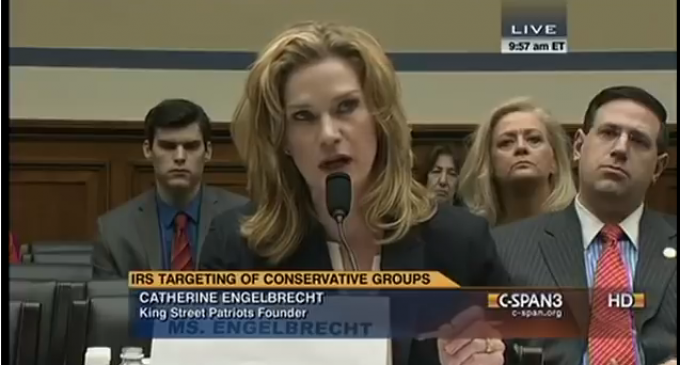 (Video) Watch Catherine Engelbert testify before House Oversight and Government Reform Committee regarding the 15+ attacks she has suffered by the feds and the IRS since submitting applications for non-profit conservative groups.

Prior to becoming politically involved her and her husband had never been audited or investigated before.

Mrs. Engelbert strength of character is undeniable: “My experience at the hands of this government in the last 5 years have made me more determined than ever than before to stand before you and to all of Americans that I will not retreat, I will not surrender, I will not be intimidated and I will not ask for permission to exercise my Constitutional rights.”

“I also refuse to let a precedent be set that allows Members of Congress, particularly the Ranking Member of the House Oversight and Government Reform Committee, to misrepresent this governing body in an effort to demonize and intimidate citizens.”

Watch her testimony and be inspired.

We wrote here about the then-upcoming hearing on the Obama administration’s IRS scandal before the House Oversight and Government Reform Committee. One of the witnesses at that hearing was Catherine Engelbrecht; she was a sensation. She introduced herself to the committee:

Good morning Mr. Chairman and Members of the Committee. My name is Catherine Engelbrecht. I am the Chairwoman of True the Vote, a nonprofit election integrity organization; the Founder of King Street Patriots, a citizen-led liberty group; and President of Engelbrecht Manufacturing.

Her testimony included these ringing words:

But know this, my experiences at the hands of this government in these last five years have made me more determined than ever to stand before you and America and say I will not retreat. I will not surrender. I refuse to be intimidated. I will not ask for permission to exercise my Constitutional rights.

Ms. Engelbrecht detailed what has happened to her since she became a citizen activist:

In nearly two decades of running our small business, my husband and I never dealt with any government agency, outside of filing our annual tax returns. We had never been audited, we had never been investigated, but all that changed upon submitting applications for the non-profit statuses of True the Vote and King Street Patriots. Since that filing in 2010, my private businesses, my nonprofit organizations, and family have been subjected to more than 15 instances of audit or inquiry by federal agencies.

* In 2011, my personal and business tax returns were audited by the Internal Revenue Service, each audit going back for a number of years.

* In 2012, my business was subjected to inspection by OSHA, on a select occasion when neither my husband nor I were present, and though the agency wrote that it found nothing serious or significant, it still issued fines in excess of $20,000.

* In 2012 and again in 2013 the Bureau of Alcohol, Tobacco, and Firearms conducted comprehensive audits at my place business.

* Beginning in 2010, the FBI contacted my nonprofit organization on six separate occasions – wanting to cull through membership manifests in conjunction with domestic terrorism cases. They eventually dropped all matters and have now redacted nearly all my files.