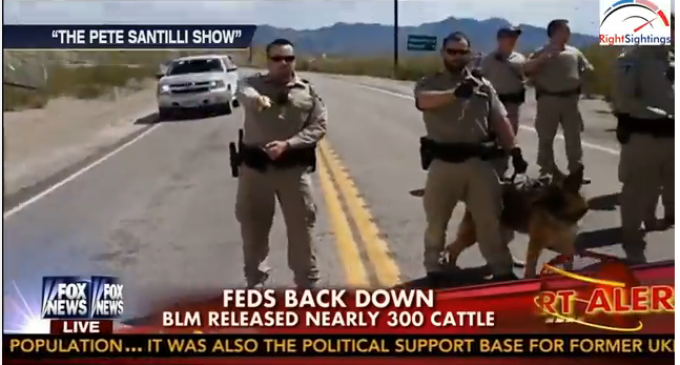 “We were among 500 militiamen at the gates. The militia went muzzle to muzzle with BLM. Fingers on triggers, safeties off. We told them we're not backing down and we are prepared to lay our lives on the lines for these principles.” – quote from citizen in aftermath of the showdown at the Bundy ranch.

This confrontation could have turned out very differently, with lives lost and with America being thrown into an active war with its government, had BLM agents not backed down.

Fox News reports that BLM withdrew because of ‘safety concerns', when the actual reality is that the agents didn't want to die.

Despite descending on the Bundy Ranch at the onset with hundreds of armed agents and fully equipped with helicopters and other military equipment, they weren't prepared for what transpired: thousands of Americans and militia groups fed up with the federal government coming in from all over the country to fight this tyranny.

These Americans showed great restraint and discipline in handling themselves in that, despite the mile-high tensions at the scene, they illustrated how armed citizens are highly responsible with their guns. And we should all be proud of them handling themselves with the spirit of liberty, valor and strength in an ultimately peaceful victory.

We are going to see more of these events in the very near future – the encroaching communist federal government certainly isn't going to give up so easily and will indeed make note of how ready Americans actually are for this revolution.

Let's just hope that the next confrontation can be won peacefully like this one has. That's probably more of a hope of fantasy than reality, however, as this ended in peace as the government didn't expect such response. Equipped with the knowledge of this event, next time they will be more fully prepared.

The second American Revolution has begun. You are watching history unfold in real time now, and of course the lamestream media has intentionally decided U.S. history isn't worth covering because, frankly stated, the media is largely run by anti-American interests who absolutely do not want any victory by the People to be broadcast anywhere.

While the U.S. government claims to be supportive of freedom in Kiev or Iraq, it is absolutely terrified of freedom within U.S. borders.

Among big media, only Fox News has dared cover this story with anything resembling responsible reporting, as you can see in this video. The video text says “Govt backs down due to safety concerns.” In reality, BLM backed down because they were grossly out-gunned and didn't want to die.

In this video, Fox Radio host Todd Starnes says, “For the past five years, we've seen the American people become increasingly frustrated with these government intrusions into their lives. [A tweet characterized this] as the 1st salvo of the American Revolution.”

I couldn't agree more. This was the 1st salvo of the American Revolution, and the framework of the Revolution has now been cast. The People now realize they can defeat tyranny by merely showing up in huge numbers armed mostly with mobile phones and video cameras (plus lawfully-obtained firearms as needed).

What you are seeing here is precisely the reason why the federal government has been pushing so hard to criminalize private firearms ownership. The government knows that as long as citizens own firearms, there is a balance of power in America. When citizens are denied the right to own those firearms, power shifts to those who own the guns (i.e. the government) who can then engage in unlimited tyranny, confiscation, intimidation and violence against the People who are left utterly defenseless.

Patriots emboldened by victory at the Battle of Bunkerville

This victory at Bunkerville is likely to encourage even more people to attend populist rallies such as the upcoming Operation American Spring, where patriots plan a massive march on Washington D.C. to arrest all of Congress and throw them out of office. “[Protesters] will assemble in a peaceful, non-violent, physically unarmed (Spiritually/Constitutionally armed), display of unswerving loyalty to the US Constitution and against the incumbent government leadership in Washington D.C., with the mission to replace with law abiding leadership,” says the Operation American Spring website, which calls for this action to begin on May 16th.

This effort is just part of a growing number of planned protests, impeachment proceedings and media events that call for an end of criminal government and a restoration of legitimate, constitutional government. The mainstream media routinely characterizes this movement as being “anti-government,” but that's factually incorrect. Nearly everyone in the movement fully supports “constitutional government” and merely seeks to restore it. They see a legitimate role for lawful government but also see today's federal government as lawless and out of control, in desperate need of reform.

When the BLM even has access to snipers, helicopters and hundreds of armed men, it makes you scratch your head and wonder why there is such a push for militarization across today's federal government. Even Mother Jones, a populist publisher typically leaning toward the left, has become alarmed at the rapid escalation of military hardware among U.S. law enforcement. Click here to read their story, “How Every Part of American Life Became a Police Matter – From the workplace to our private lives, American society is starting to resemble a police state.” The Battle of Bunkerville won without firing a single shot

What's truly commendable in the recent showdown at Bundy Ranch is the amazing discipline and integrity demonstrated by armed American citizens who did not fire a single shot during this encounter.

This must be noted in the history books: that armed citizens not only held their ground; they also held their fire! They did not seek needless bloodshed, nor did they allow it to happen. They simply stated their principles and held firm to them regardless of the outcome. Those principles were:

1) BLM is operating unlawfully and in violation of the U.S. Constitution.
2) We the People will no longer stand for federal tyranny and the theft of Bundy's cattle.
3) We are lawfully armed and willing to use force as a last resort (but seek no violence).
4) We are willing to die for these principles. You must leave or we will open fire.

When these four points are explained to any agency — including the BLM — the People have already won. Because at that point, the feds have only two choices: 1) Surrender and back down, or 2) Unleash massive violence and bloodshed (and die en masse).

Option 2 doesn't equal a “win” for the federal government. In fact, option 2 would most likely set off armed revolutionary marches and backlash operations across the entire nation. If Bunkerville had become a slaughter of anyone (citizens or BLM agents), it would have set off a series of actions which simply could not be contained by the federal government, even with an invocation of Martial Law.

Also at stake are the 2014 elections. Had BLM initiated a shooting war in Nevada, it would have strongly rallied conservatives to vote against oppressive government in the upcoming elections. No doubt a call from Washington told BLM to back off for political reasons. After all, they can always return and SWAT-team Cliven Bundy and his family after the elections are done. The march of tyranny is in no real hurry.