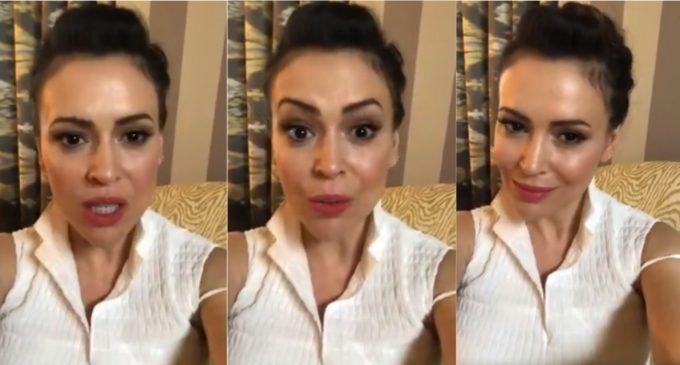 The bold experiment in democracy that began more than 200 years ago that is the United States of America is based on the Constitution. The foundational document has proven to be both stable and flexible as the world around it has undergone vast changes. The most basic intent is to protect various individual liberties of its citizens – and it accomplishes this intent like no other country on Earth.

If you’ve spent any length of time outside of the U.S. you can only return with a newfound appreciation of what you have. I’ve just spent 5 years in South America and I can tell you that the love of my country and gratitude and pride that I feel to be an American has never been greater.

That is completely lost on people who have taken our nation and it’s liberties for granted. Take far-left Hollywood actress Alyssa Milano as an example. This lady’s job is to live in fantasy land, dance, and entertain the rest of us. Obviously lacking in any kind of objectivity, she recently claimed she doesn’t have “equal rights under the Constitution.”

I invite Milano to spend a little time in Peru, where the very criminal who assaults you in the street can turn around and file a complaint against you if you hurt him while trying to defend yourself from his attack.

And women’s rights? Despite strict laws, the majority of young men in Latin America think violence against women is ‘normal.’

In Bolivia, Colombia, Cuba, El Salvador, Guatemala, Honduras, Nicaragua and the Dominican Republic, six out of every ten men aged 15 to 19 surveyed by Oxfam believe that jealousy is a demonstration of love and 65 per cent of them believe that when a woman says “no” to a sexual relationship, she really means “yes”. Similarly, seven of every ten think that a woman is responsible if she is groped or cornered because she is wearing the wrong clothes, while 40 per cent of them think that if a woman has been drinking alcohol, she is to blame if a man rapes her, even if she is unconscious.

And abortion, which the left lumps in with ‘women’s rights’? Well, out of the 33 Latin American and the Caribbean countries, only 4, namely Cuba, Guyana, Mexico and Uruguay, allow elective abortion.

Of course, the left cries for open borders…

Turn the page for Milano’s video and demand that lawmakers pass legislation to amend the Constitution.