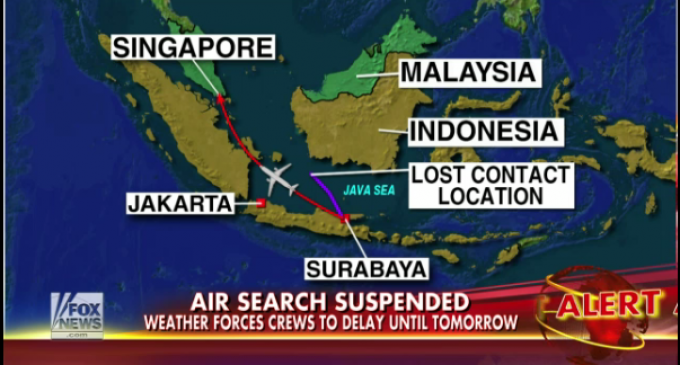 Here we go again! Both Indonesia and Singapore are searching for an AirAsia flight carrying 162 passengers that disappeared over the Java Sea early today.

The air search has been temporarily suspended because of weather conditions and will resume Monday morning local time.

Achmad Toha told The Associated Press that the planes involved in the search returned to their base Sunday evening, but that some ships were still in the area where the plane lost contact with air traffic control. The air search was set to resume at 6 a.m. Monday.

Flight 8501 was scheduled to make a relatively short early-morning flight from Surabaya, Indonesia to Singapore but lost contact with Jakarta air traffic control at 6:24 a.m. local time (6:24 p.m. Eastern Time Saturday), approximately an hour before it was due to land.

Eleven minutes earlier, according to Djoko Murjatmodjo, Indonesia’s acting director general of transportation, the pilot had “asked to hinder cloud by turning left and go higher to 34,000 feet.” Murjatmodjo said that there was no distress signal from the plane. AirAsia Indonesia had earlier confirmed that the pilot had asked to change course due to bad weather in the area.

“We hope we can find the location of the plane as soon as possible, and we hope that God will give us guidance to find it,” Murjatmodjo told reporters. “We don’t dare to presume what has happened except that it has lost contact.”

“This is my worst nightmare,” AirAsia founder Tony Fernandes said in a tweet. Earlier, Fernandes, the face of the company and an active Twitter user, sent out a tweet that said: “Thank you for all your thoughts and prays[sic]. We must stay strong.” He also tweeted that he was heading to Surabaya.

Sunardi, a weather forecaster at the Indonesia’s Meteorology and Geophysics Agency who uses only one name, told the Associated Press that dense storm clouds were detected up to 44,000 feet in the same area at the time the plane was reported to have lost contact.

“There could have been turbulence, lightning and vertical as well as horizontal strong winds within such clouds,” he said.

The single-aisle Airbus A320-200 had an Indonesian captain and a French co-pilot, five cabin crew and 155 passengers, including 16 children and one infant, AirAsia Indonesia said in a statement. Among the passengers were three South Koreans and one each from Singapore and Malaysia. The rest were Indonesians.

The airline’s statement added that the plane’s captain had a total of 6,100 flying hours, while the first officer had flown 2,275 hours.

At Surabaya airport, dozens of relatives sat in a room, many of them talking on mobile phones and crying. Some looked dazed. As word spread, more and more family members were arriving at the crisis center to await word.

Flightradar24, a flight tracking website, said the plane was delivered in September 2008, which would make it six years old. It said the plane was flying at 32,000 feet, the regular cruising altitude for most jetliners, when the signal from the plane was lost. AirAsia said that the plane had undergone its last scheduled maintenance on Nov. 16.

Murjatmodjo, the Indonesian official, said the plane is believed to have vanished somewhere over the Java Sea between Tanjung Pandan on Belitung island and Pontianak, on Indonesia’s part of Kalimantan island.

Transport Minister Ignasius Jonan told reporters in Surabaya that the position was believed to be near the coast line. He said search and rescue efforts now involved the Indonesian army, the national Search and Rescue Agency as well as Singapore and Malaysia. The Search and Rescue Agency’s operation chief, Maj. Gen. Tatang Zaenudin, said 200 rescuers had been deployed to the east side of Belitung island.

Air Force spokesman Hadi Tjahjanto said three aircraft, including a surveillance plane, had been dispatched to the area. The Singapore air force and the navy also were searching with two C-130 planes.

The Singapore aviation authority said it was informed about the missing plane by Jakarta ground control about half an hour after the contact was lost.

Malaysian Prime Minister Najib Razak, expressed solidarity with AirAsia. In a tweet he said: “Very sad to hear that AirAsia Indonesia QZ8501 is missing. My thoughts are with the families. Malaysia stands ready to help.”

White House spokesman Eric Schultz said in a statement that President Obama had briefed about the missing flight and officials would continue to monitor the situation.

According to the website FlightAware.com, Flight QZ8501 was scheduled to depart from Juanda International Airport, near Surabaya on the Indonesian island of East Java at 5:30 a.m. local time, with arrival in Singapore scheduled for 8:20 a.m. Singapore time (7:20 p.m. Eastern Time Saturday). It had last flown the route on Dec. 26.