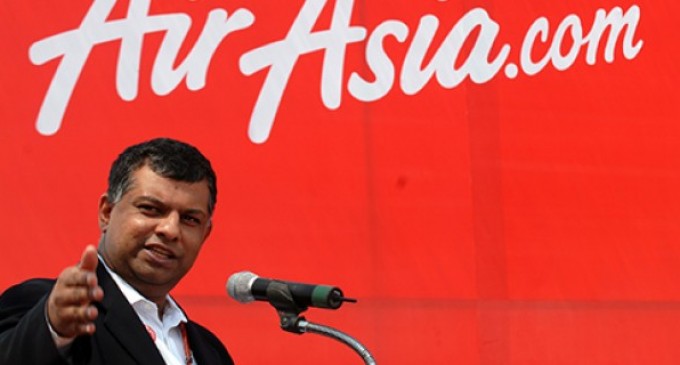 Gee, what a coincidence. Think this guy had prior knowledge of the planes disappearance?

On December 26, the Malaysian Insider reported that Fernandes, the founder of Tune Group Sdn Bhd which owns AirAsia, had sold a total of 944,800 shares in Tune Insurance Holdings Bhd, with 850,000 shares being dumped on December 22, and the other 94,800 being sold the day after.

According to its official website, Tune Insurance Holdings Bhd is “an insurance product manager” for AirAsia in which “insurance products are sold to (AirAsia) customers as part of their online booking process.”

Fernandes decision to dump the shares less than a week before AirAsia Flight QZ8501 disappeared over the Java Sea prompted some to speculate that he may have had prior knowledge of the incident.

“Did Fernandes know his company stock was about to take a hit? The timing is suspicious,” asks Heavy.com, adding, “If so, it indicates knowledge of an impending attack on AirAsia.”

The International Business Times adds that the move has prompted many to voice the theory that Fernandes, “possibly knew about an impending attack on one of the company’s aircraft.”

The story bears some similarity to the unusual market activity in airline stocks that preceded the September 11, 2001 terror attacks. An “extraordinary” amount of ‘put options’ – speculation that a stock price will fall – were placed on United and American Airlines in the days leading up to 9/11.

As we reported earlier, one of the other main unanswered questions surrounding the incident is why a Chinese blogger urged people to avoid AirAsia flights less than two weeks before the disappearance of Flight QZ8501.

Some say the posts, which were made on Chinese social media site Weibo, are a startling indication of prior knowledge whereas others claim the posts were deceptively edited after the crash of Flight QZ8501 to create the impression that its disappearance had been predicted ahead of time.