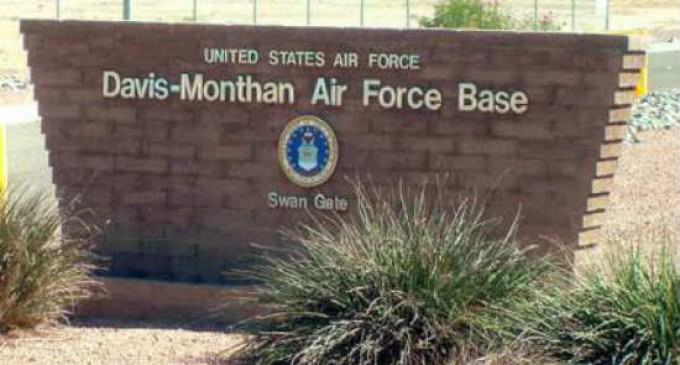 The Davis Monthan Air Force Base in Tucson, Arizona is currently in violation of Title 4 U.S. Code – Section 1, which clearly outlines how our flag should be flown and how it should look.

So why is this base allowing such decimation of our flag?

If you would like to voice your discontent with the 355th Fighter Wing Public Affairs Office about this use the contact info below:

I noticed something strange as I drove through Davis Monthan Air Force Base, in Tuscon, Arizona last week.

It was an American flag with rainbow stripes instead of the standard red and white stripes flying high on a two story house…on government property.

For those of you with military ties, you’ll understand the stark contrast between military and civilian life, and ultimately know duty comes before self. More specifically, it’s one of the Air Force‘s three core values that is drilled into us in Basic Military Training.

Everyone is free to express their sexual preferences in the Military in any way they want, but this flag flying on a military base is in violation of Title 4 of the U.S. Code.

Flag; stripes and stars on: The flag of the United States shall be thirteen horizontal stripes, alternate red and white; and the union of the flag shall be fifty stars, white in a blue field.

The flag I saw is a parody of the American Flag with 50 white stars in the union, smeared with the rainbow colors as the stripes. The moment the flag took on the union stars is where it becomes a violation, with my understanding of the U.S. Code.

After posting the story on social media, I was contacted by hundreds of active duty Airmen thanking me for being their voice.

One of these servicemen who reached out to me is an Active Duty Air Force master sergeant, and for his own protection I have left out his name. What he sent me summed up the issues that our Airmen are facing:

I support that law and will continue to serve without distinction. First, however, I am an American. I have sworn to put Service, before self (and with that, any sexual preferences, color, religion, or ethnic background). I am saddened that leadership tiptoes over moral and ethical decision making in an effort to please the minority, or to not ruffle any feathers. Where is the line to be drawn?

I cannot fly a Christian flag. I cannot have a “Christmas” party at work. It has to be a “holiday” party. The point of this message isn’t anti-gay. It’s a fundamental shift of loyalty and allegiance. It is a political statement. I cannot publicly endorse a candidate for office while in uniform, but I can openly tell the world that I am LGBT. If they are proud of the leaps and bounds that the [Department of Defense]D has made with the repeal of “don’t ask don’t tell,” then put up a rainbow flag and call it a day. But when you add the Union, it becomes a political statement. And that, my fellow Americans, is unacceptable.

This Air Force senior non commissioned officer perfectly sums up the hypocrisy and agenda-based and biased rules that our military leaders are using to enforce regulations.

It’s sad when someone who has gone to war and faced combat cannot display a Christian flag or even a Gadsden flag because it may be offensive. However, a flag that is in violation of the U.S. Code that mandates base regulations and policy is allowed?!

The following statement was the first of two that were sent to me by the 355th Fighter Wing Public Affairs Office:

We are currently reviewing this issue and have taken no action at this time. We take seriously our responsibility to abide by federal law and defend the Constitutional rights of all citizens.

Then three days later I received the final ruling:

The installation commander carefully considered the opinions of legal professionals and the law. The display in question is not an altered U.S. flag; therefore, its display does not violate federal law. No action will be taken.

I can only imagine the legal conversations that went down to formulate this decision. Even a simple Google search reveals what we already knew. The flags are sold as “Gay Lesbian American Flags.” There you have it, let’s call a spade a spade and cut out the political correctness.

It doesn’t take a rocket scientist to notice the stars are perfectly laid out per the standard proportions for the U.S. Flag design guidelines. Furthermore, the stars are the same color with the same background. Are you really saying this is “not and altered U.S. flag?” You can’t be serious!