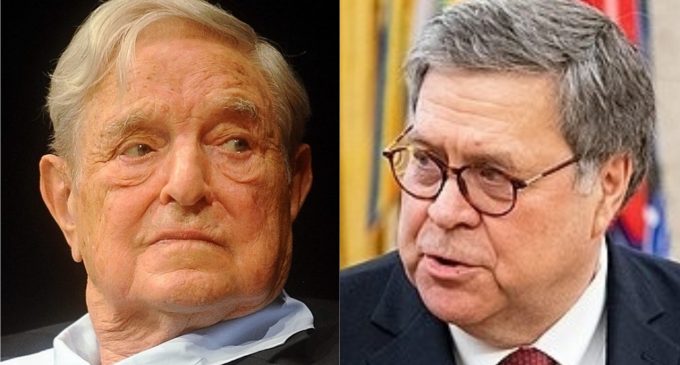 George Soros, enemy of liberty and freedom, has come under the scrutiny of Attorney General Barr. Will this lead to criminal charges? Or will the multi-billionaire champion of global government find a way to buy his way out of trouble?

Few things would be more pleasing than seeing Mr. Soros marched off to prison or put on boat back to his home country of Hungary to stand trial there. Especially if he were first fined an amount equal to his net worth. Well, okay, seeing Hillary convicted of her many crimes would rank right up there.

So this man is no friend of freedom. And Barr contends he is meddling in local elections now in addition to his well-publicized support for any candidate at the national who hates America.

Of course it’s possible that he’s just barely on this side of the law. He certainly has plenty of money for the best legal advice one can buy.

What he’s doing is looking for local elections for prosecuting attorney where there is low turnout. He then funds a candidate who exemplifies all that is rotten about Mr. Soros and his ideas. In other words, he’s trying to buy off local law enforcement on the cheap so the local police are neutered, this by Soros-backed prosecutors.

And you might have thought that his tentacles only extended into national elections. This malefactor is busy everywhere he can subvert what America stands for.

How Attorney General William Barr has weighed into the battle is on page two.