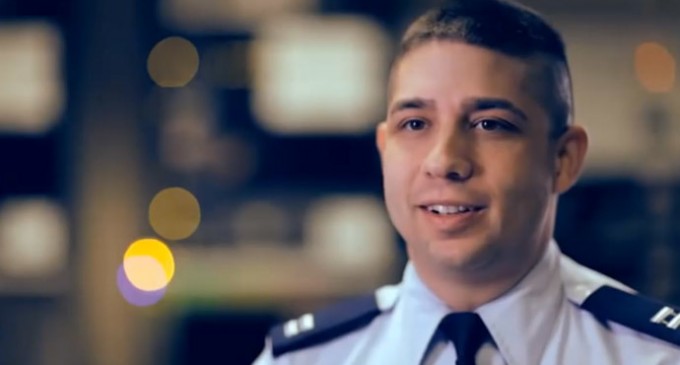 Imagine answering the door to a police officer telling you he’s investigating ‘suspicious activity’ and asks you for your ID. You show it to him, but don’t hand it to him, so he promptly throws you on the ground and handcuffs you.

Later, even though you did nothing wrong in the first place, you are charged with  resisting arrest and obstructing a peace officer, putting your career is in jeopardy.

This is exactly what happened to US Air Force Capt. Nicolas Aquino one Saturday afternoon last December.

The Monterey County District Attorney is pressing charges against this man with two misdemeanors.

If you would like to call the Monterey County DA and register your grievance at this atrocity you can do so with the contact information below:

An Air Force captain was mistaken for a burglar, tackled and handcuffed in his own California home in December. Now he’s in court for resisting arrest and obstructing a peace officer, and his career is in jeopardy.

US Air Force Capt. Nicolas Aquino, a student at the Naval Postgraduate School at the time, was at home on a Saturday afternoon in mid-December when his dogs began barking, the Monterey County Weekly reports. Aquino opened the door to a police officer, stepped outside and closed the door behind him.

That police officer was Monterey Sheriff’s Deputy Ivan Rodriguez. He told Aquino he was investigating a report of suspicious activity in the area. According to his written report, he was looking for “an adult Hispanic male wearing a hoodie” walking around and into a Carmel Woods’ home. Aquino was wearing a hoodie, and had previously been walking outside his home, looking for a UPS package.

“All he said was, ‘I need to see your ID.’ At that moment I’m like, ‘Excuse me sir, but who are you? And why are you here?” Aquino told KSBW.

“He says it again, I have to produce identification. At that moment I asked him, ‘Am I being detained?’ He said, ‘Yes,’ and so I said, ‘OK, then my name is Nicolas Aquino. I live right here. I’m in the military’,” Aquino said.

Aquino says he then pulled out his wallet to show his military identification, but did not hand the card to Rodriguez.

Rodriguez’s report then says, “The male then pulled his hand away from me, thereby moving the card away from my hand. I decided at that point I would detain him physically and place him into handcuffs.”

Then things got rough, Aquino told KSBW. “That’s when he grabs my wrist, puts me in a front guillotine, slams my head into the ground and spins around and does a rear naked choke, so he puts me in a choke hold,” he said.

Rodriquez was sitting on top of Aquino, with his hands around Aquino’s head. “I yelled at the male to put his hands out to his sides. The male never complied. He was beginning to draw them in closer to the center of his body,” Rodriguez wrote in the incident report, according to KSBW. “Afraid that the male was going to reach for a weapon, I contemplated disengaging from him, drawing my own firearm and taking aim.”

A second deputy arrived on the scene. Aquino was handcuffed and put in the patrol car, the Monterey County Weekly reports. Aquino told the police that he didn’t consent to a search of his house, according to the local newspaper. “They went to my door and it appears they went into my house.” After 20 minutes, the police officers let Aquino get bills from his home to prove he lived there.

Aquino claims the deputy blamed him for the situation, telling him that he should have known his neighbors better. Then, Aquino says, Rodriguez told him, “You started this by not giving me your ID.”

Aquino was not charged with any crime at the scene. He and his wife moved from the home with two months left on their lease, too upset to stay after the incident. Nearly seven weeks later, at the end of January, an officer at the NPS called Aquino and told him, “Don’t come to NPS or any other base, there’s a warrant out for your arrest,” the Monterey County Weekly reports.

The Monterey County District Attorney was pressing charges in the incident. Aquino was charged with two misdemeanors: resisting arrest and obstructing a peace officer. Aquino asked the DA to drop the charges, “but was told it wasn’t going to happen,” KSBW reports.

Aquino had his first pre-trial hearing last Wednesday, the Monterey Herald reports. His lawyer, Steve Liner, is seeking a court order to open Rodriguez’s personnel file. The DA’s office is looking at the case for the potential for a plea agreement, and District Attorney Dean Flippo asked prosecutors “hold off on doing anything,” Chief Assistant District Attorney Terry Spitz told the Herald.

Liner told the Herald that Aquino has since finished his studies at NPS and was recently scheduled to be deployed, but has remained in the California county until the case is resolved. Aquino told KSBW that the entire ordeal has put his military career in jeopardy.

Aquino is a first-generation American whose parents fled Paraguay as refugees. The Air Force has used Aquino in a promotional video based on his life.