Indeed, a year after the alleged rape at the Golden Globe Awards, Misty Upham “disappeared.” On October 5, the Django Unchained actress went missing from her Auburn home. On October 16, friends and family searching for Misty found her body in a ravine near the White River, about 30 miles south of Seattle.

Police state her death was due to blunt force and trauma, but that the trauma was caused by natural factors.

The medical examiner ruled her cause of death due to blunt force injuries to her head and torso.

After she died in 2014, police said her death was caused by a fall and they do not know what happened. Her father immediately noted that it was not suicide, however.

Her father claims however that this is absolute nonsense and that his daughter would never kill herself, and that she had been fearing for her life in the days leading up to her death. 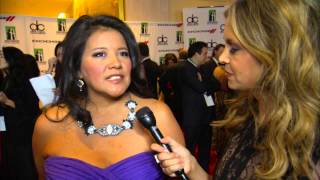 “She has said suicidal things in the past but never followed through,” he said at the time. “She doesn’t believe in killing herself. She believes that is a sin and she would never do that.”

As the Daily Mail reported at the time of this “accident”, Misty’s family claims they have reason to believe something far more sinister happened.

Mysteriously enough, as the Daily Mail reported, in the days after the discovery of Misty’s body, her family came out with claims that the 32-year-old woman fell to her death by accident while running away from police. Upham’s parents alleged that the Native American actress had been mistreated and that the Auburn Police Department did not take her disappearance seriously.

Her father explains that Misty has been having uncomfortable interactions with the police in the weeks leading up to her death.

Charles noted specific examples of how Misty was abused at the hands of the police.

“Misty was afraid of the Auburn PD officers with good reason. In an incident prior to her disappearance, the Auburn PD came to pick up Misty on an involuntary transport to the ER.

“She was cuffed and placed in a police car. Some of the officers began to taunt and tease her while she was in the car.

“Because it was dark they couldn’t see that we, her family, were outside our apartment just across the street witnessing this behavior.

“They were tapping on the window making faces at her. Misty was crying and she told them ‘you can’t treat me like this I’m a movie actress and I will use my connections to expose you.’

“Then another officer walked up to her asked ‘are you a movie star? Then why don’t complain to George Clooney!’”

The medical examiner himself admits that there is no proof one way or the other, as to what really happened to Misty Upham.

To this date, the official report from the medical examiner is that  “the manner of her death – whether by foul play, suicide or accident – could not be determined.”

Here is what we do know:

1) She was allegedly raped by a Weinstein level executive

2) She claimed to have DNA evidence to support her case

3) She was found dead

As TFTP reported earlier this month, Harvey Weinstein reportedly employed ex-Mossad agents to track, intimidate, and otherwise silence his victims and journalists who were going to expose his alleged abusive behavior. Could he have used these same connections and had a hand in Misty ‘falling’ off this cliff?