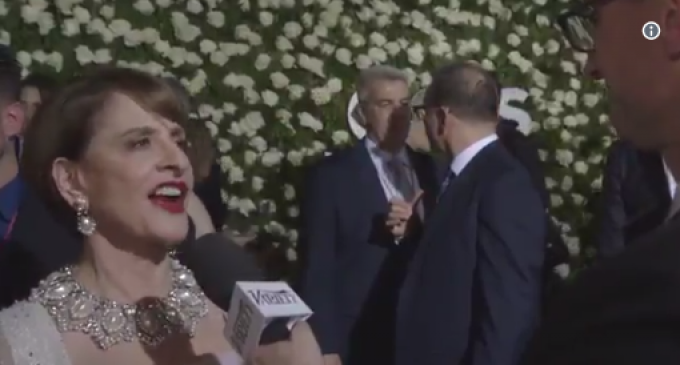 If I said to you, “Hey, how about that Patti LuPone?”  You might answer, “Oh, I love that ‘Lady Marmalade' song!”  My response would then be, “No, that's Patti Labelle.”

I agree…the name really didn't ring a bell.  Although I do love watching plays, I'm definitely not what you might call a “Broadway Rat.”  I have to admit that when I heard this woman's name, I had to go look her up online.  I was sort of surprised to find that she was so famous…at least in the Broadway stage sort of way.  Her most famous role was Evita Peron in the Broadway show in the '80s, “Evita.”  You know, “Don't cry for me, Argentina”?

There are three things that Patti Labelle and Patti LuPone have in common and that is they both played Broadway, they both were guests on American Horror Story, and they both love Barack Obama.

What is not so apparent for Labelle is her thoughts on our new president, Donald Trump.

Now, typical Leftists hate Donald Trump for no other reason than that Leftists hate everything that doesn't follow each and every one of their 3,000 agenda issues, be it Identity Politics, Pro-Abortion, Rioting, Raising Taxes, Promotion of Islam, Gay Marriage, Global Warming, or Christophobia.  If you follow one, you need to follow all.  If you deny just one, you are excommunicated from Club Progressive.

So, back to Patti LuPone…

LuPone is one of those Leftists who is too full of her own image, much like her hero, Barack Obama.  She is a snob, to be sure, and believes (as do all Leftists) that she is loved and adored by everyone based on the fact that she is a card-carrying Liberal.  Obviously brought up in the 1960s to be an in-your-face sort of communist-slash-anarchist.  In fact, don't be surprised if we learn someday that she was actually a member of the Weather Underground and swapped spit with Bill Ayers.

It's possible that I'm wrong, too.  There's a possibility that she was one of those very quiet wallflower types in high school who was a brainiac and ridiculed for being the prude for wearing her skirts too long and having her dad accompany her to the local dances.  It's possible that when the sexual revolution occurred, she was inspired by Jane Fonda and went out the next day to burn her bra and get in line for her free penicillin shots…you know, just in case.

LuPone was parading around as if she actually was Evita Peron, looking a bit like Kathy Griffin after a post-beheading all-night bender, when a reporter asked her a question about the President.  While we can't actually print her response, we can allude to the conversation by phonetically spelling it in military code.  Too put it mildly, it was the kind of thing you might hear at the Apollo Theater on amateur night.  Turn the page for her colossally moronic response…