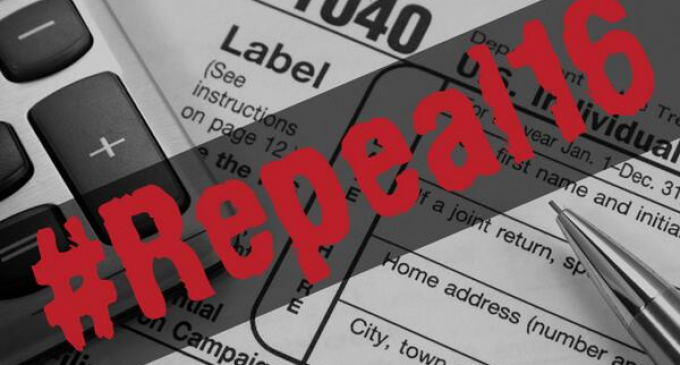 We need to end the IRS.

It is unconstitutional and only serves to be a police force for the federal government.

This country got along just fine with no IRS before and we can do it again!

Congressman Jim Bridenstine, R-OK, Reps. Ron DeSantis, R-FL., and Thomas Massie, R-KY., has introduced House Joint Resolution 104, “an amendment to the Constitution of the United States to repeal the 16th article of Amendment.”

Three American Congressman are taking a stand for the citizens of this nation and leading an effort to steer us back in line with the Constitutional government as it was given to us by our founders. It is a large step but one that is sorely needed if we are to ever free ourselves from the shackles of our global government protagonists.

Congressman Jim Bridenstine, R-OK, along with Reps. Ron DeSantis, R-FL., and Thomas Massie, R-KY., has introduced House Joint Resolution 104, “an amendment to the Constitution of the United States to repeal the 16th article of Amendment.”

Among the arguments made in favor of this legislation is a resolution to the conflict which exists between the 16th amendment and the 4th Amendment protections to be secure in our persons, houses, papers and effects from unreasonable searches and seizures. Bridenstine’s contention is that the methodology of IRS seizures and IRS data-mining in the form of intrusive mandatory tax form submissions violate the fourth amendment protections.

Repealing the 16th Amendment would eliminate the personal and corporate income taxes, the estate and gift taxes and the taxes on investment earnings at the federal level.

The process is not difficult but does require some time and the involvement of the states and citizens. There is a simple three-fourths of the states approval threshold which must be met in order to repeal an amendment.

After ratification, there would be a two-year period which is more than enough time in which to determine a replacement revenue system. Many alternatives have been proposed, but they have lacked sufficient momentum to overcome the efforts of lobbyists supported by those receiving benefits from the current taxation scheme.

In announcing the plan, Bridenstine remarked that the “personal and corporate income tax is a punitive tax on productive effort which discourages investment, innovation, risk-taking and job formation within the United States.”

He added that the tax law, as is, is simply unfair and subject to “endless manipulation” by those seeking political advantage.

Consider those points in conjunction with the recently exposed use of the IRS as enforcement muscle against groups or individuals with opposing views from those in power and it is obvious that the agency and the system have to go.

The involvement of the IRS in our healthcare, through obamacare, will only exacerbate an already complicated, unworkable, corrupt and unjust system. There is no realistic way to fix it other than to just eliminate it and start fresh.

A large portion of the income tax revenues simply go to pay interest to the Federal Reserve. Action to eliminate the central bank would make a wonderful piece of companion or follow-up legislation.