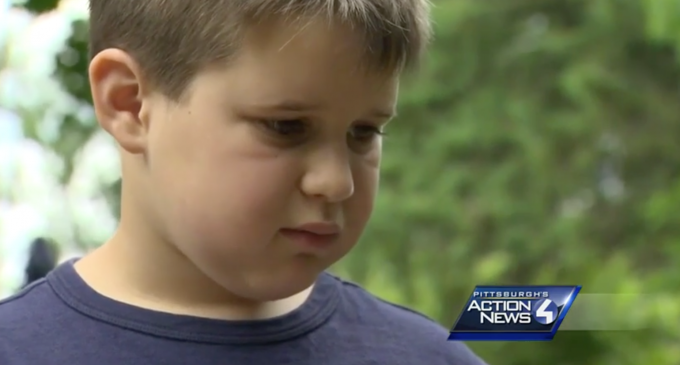 7-year-old Darin Simak from New Kensington, PA,  is quite a confused little boy after having been suspended from school – and facing possible expulsion – after he turned in a toy gun to a teacher that he discovered in his backpack.

The school considers the toy gun a ‘weapon' and is a “Tier 3” offense, meaning it's an automatic suspension.

This is nothing more than the demonization of guns in the minds of our youth. We should embark on nationwide campaign to start a gun education class throughout all schools to combat these leftist propaganda scare tactics enforced on our kids.

New Kensington first grader Darin Simak realized on Wednesday that he had something in his backpack that was not allowed at Martin Elementary School. It was a toy gun that was in the outside pocket of the bag. Darin was unaware of the toy because, as his mom, Jennifer Mathabel, told WTAE Action News 4, she packed her son’s bag which was a backup because he left his normal school bag in a friend’s car the night before, and she missed the toy gun.

Darin said, “I just found it.” The child knew the right thing to do, and took the toy to his teacher telling her, “I’m not supposed to have this.” As reported by the Valley News Dispatch, the teacher followed the school’s protocol and notified the principal, who then suspended Darin pending an informal hearing. The hearing has since been scheduled for Friday at 11 a.m. with the superintendent.

Mathabel says the administration had her pick her son up early on Wednesday and told her not to bring him back to school the next day. However, she disagreed and sent Darin back to Martin Elementary on Thursday. “I got a phone call from the principal at about 9 a.m., and she said, ‘Darin is not to be in school,’ said Mathabel. “I said, ‘Well, I'm sending him to school because he is entitled to be in school and be educated.’” That day, the boy was placed in the office and given in-school suspension. Darin’s father, Chris Simak, disagrees with the suspension and told the paper, “What was he supposed to do?…Just hide it and keep it in his bag so he doesn't get in trouble?”

John Pallone, New Kensington-Arnold School District superintendent, would not comment on the incident citing student privacy. The Valley News Dispatch examined the school’s policies and found that students are prohibited from bringing weapons and replicas of weapons onto school property. It states that if a student is found in violation, “the school district shall expel for a period of not less than one (1) year any student who violates this weapons policy. Such expulsion shall be given in conformance with formal due process proceedings required by law. The Superintendent may recommend modifications of such expulsion requirement on a case-by-case basis.” The self-reporting aspect, as in Darin’s case, is something that is not specifically addressed in the school’s policies.

Mr. Simak told the Valley News Dispatch that his son was suspended twice before this incident but is not violent. One suspension was for pushing his friend during an argument, and another was for teasing on the school bus. In this case, the father feels a suspension is the wrong response to a child who was simply telling the truth, saying, “He did the right thing, and we're trying to teach him the right way…and now they're teaching him the wrong way.”