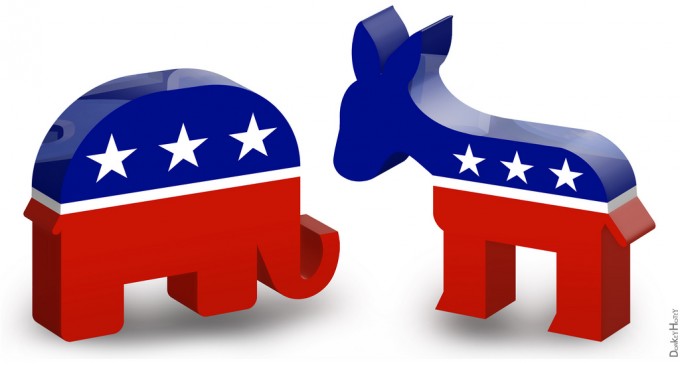 The American public is apparently as conservative today as it has been in 50 years, according to Cornell political scientist Peter Enns, citing both his own work and work done by Vanderbilt professor Larry M. Bartels.

In fact, based on the joint efforts of Enns and Julianna Koch, all 50 states have experienced a shift towards conservatism. This revelation starts with Bartels. See, Bartels examines James Stimson’s measure of public support for various government programs (it spans from 1950 to 2012). Taking it a step further, Koch and Enns measured policy moods for each state from the 1950s to 2010. “The figure below presents one illustration of this pattern.

Here we compare the policy mood in each state in the early 1960s (hollow dots) and in the early 2000s (solid dots),” Enns writes, explaining their findings. “Higher values indicate a more conservative policy mood. In each instance, the solid dot is to the right of the hollow dot, suggesting that the public’s policy mood has moved in a conservative direction in every state. Furthermore, most of these increases are statistically significant,” he adds.

The uniform shift across states surprised the researchers. So they decided to revisit two questions asked by the American National Election Study in the 1960s and the 2000s. The questions, of course, deal with government.

“Because we were dealing with much smaller sample sizes, we analyzed regions instead of states. Again, the data suggest that all regions of the country have shifted in a conservative direction,” Enns writes.

Now it’s important to note public opinion hasn’t shifted to the right on all issues.

“For example, support for same-sex marriage has been increasing across all states. It is also worth noting that our findings on the 1960s and 2000s hides important shifts in policy mood between these periods, such as increased policy liberalism during the 1980s,” the researcher notes.

“However, when it comes to support of government programs, the net conservative shift is clear,” he adds.