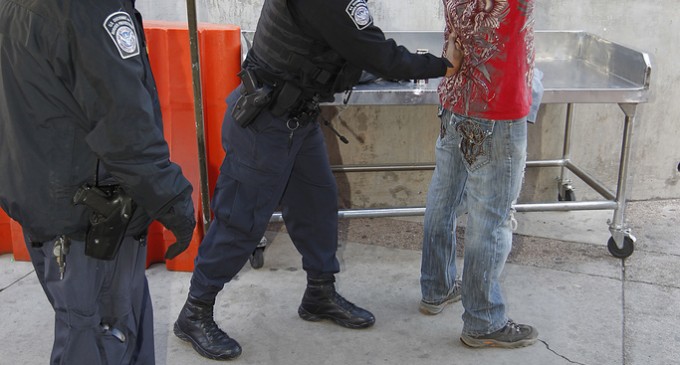 The Tenth U.S. Circuit Court of Appeals just ruled that the police can stop, search and arrest you for innocent behavior like: driving with your hands on the steering wheel at the 10/2 position, taking a scenic route and having acne.

The court stated, “Although the factors, in isolation, may be consistent with innocent travel … taken together they may amount to reasonable suspicion.”

In other words, the police can stop you for no reason whatsoever. All they need to do is add a little ‘suspicious context' to your behavior or appearance and off you go to jail.

The court decided this through case USA v. Cindy Lee Westhoven, No. 13-2065, in which Ms. Westhoven battled border patrol.

Incredibly, the court sided with the officer and determined that these constituted ‘reasonable suspicion':

– “Her arms were ‘straight and locked out' at a ‘ten-and-two position on the steering wheel,' as everyone is taught in driver's ed in high school.

– The road was used primarily by locals in New Mexico, and Westhoven had Arizona plates.

– She had acne scarring, “indicating to him she might be a methamphetamine user.”

– He also thought the shopping was better in Tucson than Douglas, so this was also “suspicious.”

We have no Constitutional rights at the border as these types of illegal searches are now commonplace. Under the guise of ‘protecting us' against illegal aliens, we are being acclimated to illegal searches.

But it's very obvious that the government just doesn't want to close the borders and intends to grant residency to the millions of illegals already here.

When you step back and take a look at the general effect, one can see that this only serves to destroy our 4th amendment rights.

A federal appeals court just ruled that the police have a legal right to stop, search and arrest you for innocent behavior including driving with your hands at the ten-and-two position on the steering wheel at 7:45 p.m., taking a scenic route and having acne.

To the Tenth U.S. Circuit Court of Appeals, these factors added up to fit the profile of a person smuggling undocumented immigrants and drugs. The court said, “Although the factors, in isolation, may be consistent with innocent travel … taken together they may amount to reasonable suspicion.”

In other words, the police can now stop you for no reason at all. Law enforcement just needs to add a sinister context to your behavior, and off you go to jail. The court endorsed this expansion of aggressive police behavior in USA v. Cindy Lee Westhoven, No. 13-2065.

Not what the Founders had in mind

This is not the result that the founders of our country had in mind when they added the Fourth Amendment to the Constitution. It forbids unreasonable searches and seizures, and requires the police to have “reasonable suspicion” that there is a crime underway, based on facts they can articulate.

In this case, Cindy Westhoven of Tucson, Arizona, argued unsuccessfully that a border patrol cop had no right to stop her and no reasonable suspicion to extend the stop once it was clear she wasn't smuggling Mexicans.

This case struck me because I live in Tucson and have myself been stopped by the border control for no good reason. In my case, my wife was driving me to the Tucson airport to catch a 6 a.m. flight for a business trip. I was wearing business attire, the contents of our 2011 Subaru Forester were easily viewable from the outside and we obeyed all traffic laws.

A border cop pulled us over and interrogated us about where we came from, why we were out and where we were going. Neither of us has ever been arrested for anything and we were doing nothing wrong. The cop was clearly fishing for a reason to hold us but finally gave up, and I did catch my plane.

The experience left us with a nasty feeling. We could tell what the result would have been if we weren't white, if we had an older Nissan Rogue or Sentra favored by Latinos, if we were in our 20s, and if I weren't a lawyer who remained calm.

Westhoven was driving home on scenic Route 80 through New Mexico in the evening of April 18, 2012, after shopping in Douglas, AZ, a town known for its handmade crafts and bargains. The road is part of the Route 66 National Scenic Byway, about 45 miles from the border.

She spotted a border cop following her and hit the brakes to slow down. Her white Ford F-150 truck had tinted windows, which is very common and legal in the the sun-drenched Southwest. Border Patrol Agent Joshua Semmerling pulled her over and she produced her driver's license.

The cop was frightening enough that she became extremely nervous and started to stutter. After he ran her identification and found no warrants, he returned to her truck. She said, “I thought you were going to let me go. Do you think I'm hauling illegal aliens?” That was the wrong thing to say, because the cop then asked to search the car. Westhoven said no. Then he told her she could not leave until backup arrived.

Incredibly the court found that this scenario created a reasonable suspicion for an “investigative stop.” By inserting a context that would make every driver guilty, the court upheld this belligerent law enforcement:

The officer said he spotted the car because “her arms were ‘straight and locked out' at a ‘ten-and-two position on the steering wheel,' — as everyone is taught in driver's ed in high school. He was also suspicious because the road was used primarily by locals in New Mexico, and Westhoven had Arizona plates. She had acne scarring, “indicating to him she might be a methamphetamine user.” He also thought the shopping was better in Tucson than Douglas, so this was also “suspicious.”

“The dark tinted windows on Ms. Westhoven's truck raised Agent Semmerling's suspicion that she might be concealing something or someone in the back of her truck,” the court added.

The time happened to be between a 6-to-8 p.m. border patrol shift change, and the cop inferred that Westhoven was a smuggler trying to exploit that two-hour window. Westhoven was nervous, taking long pauses and shaking — which apparently signaled criminality.

The final nail for Westhoven was that she had two cell phones visible in the car. The cop said this was a common practice for drug smugglers. It is also common for people who have a business phone and a personal phone.

The federal court's rubber-stamping of this over-the-top law enforcement aggression sets a bad precedent for law-abiding citizens. We no longer have a free country if the innocent behavior of ordinary people can be recolored with nefarious purposes and used to stop, search and arrest us.