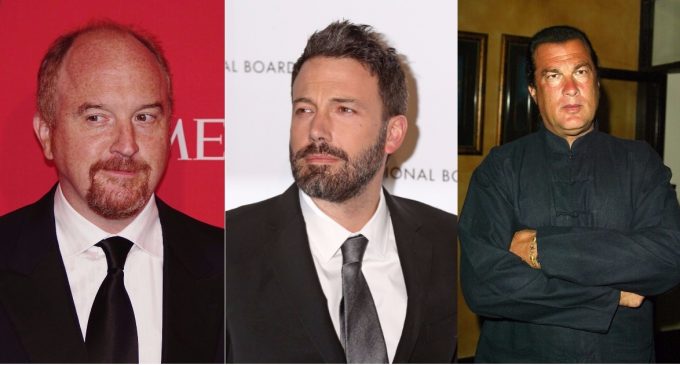 Unless otherwise indicated, these stand only as allegations.

Is there any doubt the entertainment industry, that Harveywood is enabling an unspeakable war on women … and children?

Suspended over allegations of sexual misconduct.

Accused of the sexual assault of a 16 year-old girl.

Accused of manipulating auditioning actresses to get undressed.

Suspended over allegations of misconduct.

Bullying and sexist behavior towards women.

Multiple allegations of sexual harassment, assaulting and drugging a client.

Fired over multiple allegations from female staffers, including groping.

Accused of sexually assaulting an actress.

Suspended over allegations of sexual harassment.

Resigned due to allegations of sexual harassment.

Accused of attempting to seduce a 14 year-old boy.

Accused of sexual misconduct and harassment.

A society that believes it is okay to prey on women and children is a declining civilization. We are headed for a collapse if nothing is done to stop the impending destruction being handed down under the guise of “progressive” ideologies. The demise of Hollywood “god” Harvey Weinstein is ushering in an opportunity for us to have a second chance at redeeming our society. We can hold these perpetrators accountable.

Some of these victims are men. But, the majority are young women and children. Under a God-fearing society, men are the defenders of these very same groups being attacked. Instead today we are seeing the preying on of vulnerable groups seen as an institutionalized right of the wealthy and powerful.

Today we hold these men accountable for their alleged sexual misdeeds and assaults:

Unless otherwise indicated, these stand only as allegations.

The list of Hollywood perverts now accused of preying on women and children is 46 and counting! These are the “heroes” of American society – if you don't feel sick, you should be.

Head on over to the next page to help expose the other 43 names of the alleged sexual predators earning millions of dollars through the money we spend on Big Hollywood entertainment.

Every hear of a guy named Stephen Segal?