The facility has been taken off lockdown as the suspect has been shot and killed.

At the moment, there is no information on who the shooter was or his intentions. One that that is for sure, this gives more venom to the gun control nuts.

A photo that she took shows glass doors damaged by the gunfire. 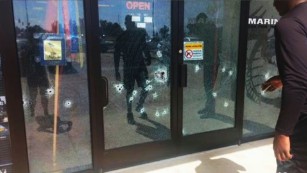 April Grimmett says she took this photo showing damage to glass at the military recruiting center on Lee Highway in Chattanooga.

“I could not believe how many bullet holes were in that door. It was insane,” she said.

The U.S. Navy said that besides the Navy Reserve center, it was also investigating reports of a shooting at another Navy building in the city. It wasn't immediately clear whether that second Navy building was the recruiting center that the witnesses spoke about.

“Horrific incident in our community,” Berke, the mayor, tweeted. “We will release details as they are confirmed. Prayers to all those affected.”

Photos posted on Twitter by media outlets showed police blocking a road and a large number of patrol cars.

Chattanooga State Community College asked people on its main campus to stay inside because of a “confirmed shooting,” the school said on Twitter.

Memorial Hospital in Chattanooga is “on precautionary lockdown” due to the shooting reports, hospital system spokeswoman Lisa McCluskey said.

“We have not received any shooting victims,” McCluskey said. “We are still accepting new patients.” The lockdown, she said, “is just a precautionary measure.”