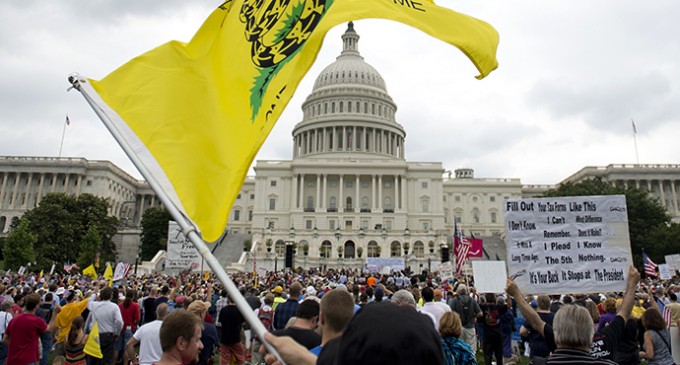 The march on Washington, named “Operation American Spring, founded by Col. Harry Riley (Ret.), is scheduled for tomorrow and seeks to remove all treasonous politicians from office.

Protestors for Operation American Spring will meet at Arlington National Cemetery on Friday morning, then march on the capital and remain until the stated politicians are removed.

“Camp is up and we have been meeting the other state camps. Good solid folks all the way around,” Riley wrote in post.

Patriots on the forums have been arranging travel accommodations from Tucson to Des Moines to Texas and across the country. There is still debate whether or not to bring firearms.

One thing for sure, the feds know about this event and certainly would have anticipated such uprisings before they ‘went in for the hard kill' of our Constitution with Obama.

What their response will be is, of course, unknown. Will they react with force and use the event to further demonize patriots and lead us into a civil war? Or will they back down like they did with the Bundy Ranch? The Bundy Ranch event might have been a test, but my guess is that it probably wasn't anticipated.

God speed patriots. Our prayers are with you all!

Riley told Before Its News in January that he expects his Operation American Spring movement will provoke anywhere from 10 million to 30 million Americans to mobilize this week and arrive in DC, where they will participate in a “massive, gigantic effort as a last stand before America moves into a more devastating condition.”

“For more than five years, ‘we the people’ have been writing, calling, faxing Congress, the media, screaming in town halls, marching, rallying, demonstrating, petitioning, all to no avail,” he said. “Every branch of government looks at ‘we the people’ whom they have taken an oath to serve, as ‘pests,’ interfering with their political agenda, cramping their self-serving, greedy agendas. We have no faith in the ballot box any longer, as many believe this sacred secret box has been compromised.”

To bring about that change, Riley says he hopes his group succeeds at shutting down the federal government. Whether or not all 29,999,999 of his compatriots will follow through, however, remains yet to be seen — a similar protest against Pres. Obama’s administration arranged last year by a fleet of truck drivers fell well short of making the dent that that group hoped to make.

“Last October,‘10,000’ truckers were reportedly on their way to literally clog the Beltway and shut down traffic in protest of Washington politics,” Abby Ohlhiser wrote for The Wire on Thursday this week. “In reality, about 30 truckers showed up, and they caused no delays worth mentioning.”

Should Riley succeed in wrangling up 30 million Americans, Ohlhiser added, then he’ll have garnered the support of around one-tenth of the US population.

And though that goal — or the substantially smaller 10 million figure — is unlikely to be met, some individuals are already claiming on the official Operation American Spring forums to have arrived in the DC area ahead of Friday’s planned demonstration: on Thursday morning, one member of the message board wrote that his truck had already finished the 2,750 mile haul to the DC region in around 50.5 hours and had set up a base at a compound 27 miles outside of the city in rural Virginia.

On a separate page linked from the forums, Col. Reid wrote that “One million or more of the assembled 10 million must be prepared to stay in DC as long as it takes to see Obama, Biden, Reid, McConnell, Boehner, Pelosi and Attorney General Holder removed from office.”

“We must appeal to ten million and more American patriots to come and stay in Washington, DC to stop the White House and Congress from total destruction of the United States. It’s now or never. God help us,” he wrote.