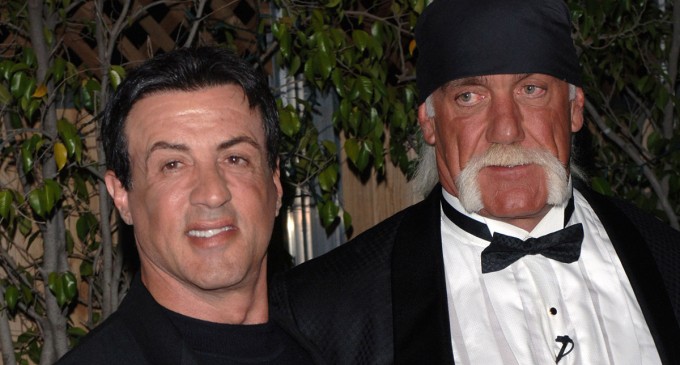 Donald Trump, the billionaire businessman Republican presidential candidate, has a different sort of celebrity and also a different level of media savvy than his political opponents. That goes for the other Republicans he climbed over to get the nomination as well as the Democrats. Trump is a firebrand and has made his share of enemies as he made his name in business and later, in the entertainment realm. But he has no shortage of allies and supporters, even some you may not have known about.

“The Donald” may not have the type of notoriety that Hillary Clinton does, but that's because he hasn't been under felony investigation by the FBI, a status that carries its own type of ‘fame'.

Now we present for you this slideshow of some of the surprising entertainment celebrities who have spoken up in support of Trump. Some of them are particularly astonishing, coming from an industry not known for supporting Republicans!

Rocky and Hulk Hogan are not alone. Long-time Hollywood icon, Clint Eastwood is yet another example. From his famous early films, such as “The Good, the Bad, and the Ugly,” “Hang 'em High,” and “The Outlaw Josey Wales,” to his later successes as director and producer of movies such as “Gran Torino,” and “The 15:17 to Paris.” Eastwood also won a landslide victory when he was elected mayor of his home town of Carmel, CA, with a whopping 72% of the votes!

Known for his no-nonsense style and conservative attitudes, it's no surprise Eastwood supports Donald Trump. “I'd have to go for Trump,” he told Esquire in an interview. He praised Trump for being forthright, saying, “What Trump is onto is he’s just saying what’s on his mind. And sometimes it’s not so good. And sometimes it’s… I mean I can understand where he’s coming from.”

Although the mainstream media likes to focus on the anti-Trump screeching of leftist celebrity darlings, Clint Eastwood isn't the only entertainment star who publicly supports Trump. Here are 13 more outspoken celebrities who agree!

And of course, this list would really be incomplete without Chuck Norris. Plus, he might do a roundhouse-kick to this article if we failed to list him! The legendary Chuck Norris has a well-earned reputation as a fearless, yet decent celebrity. After serving his country in the U.S. Air Force, Norris went on to gain fame as a martial artist, eventually founding a school to train others. His charisma and martial arts talent landed him film roles with Bruce Lee and a host of others. Later, he appeared on TV as “Walker, Texas Ranger,” and is also a spokesman for the NRA. Throughout his career, he's had a rare reputation as a humble and moral person.

After the RNC, Norris declared his support for Donald Trump, stating in an article, “There is no doubt about it: A ‘no' vote for Trump is a vote for Hillary. Any way you boil it down, that's the end result. And every last person across America needs to sincerely reflect upon the fact if they want to vote for Hillary by merely staying home on Election Day. That is what she is hoping for.”

Norris is not the only celebrity to speak out in support of Trump. In an industry that seems to be full of unthinking Socialist sentiment, it's good to know that Chuck and others stand with the President.