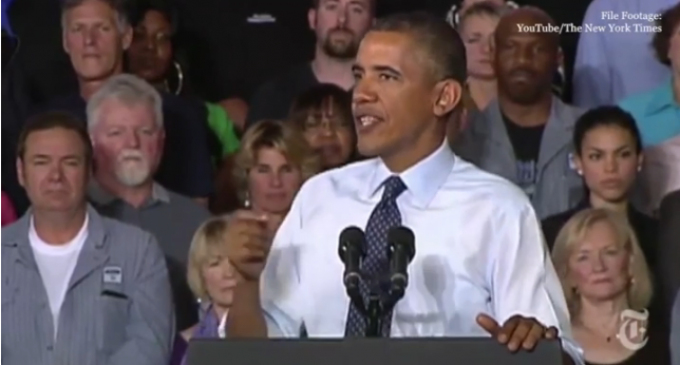 Obama is a criminal, according to 11 attorneys who state he's breaking the law with the changes he is making to Obamacare without getting Congressional approval.

Lying, breaking the law, nullifying our Constitution…it goes on and on.

And many people in all 3 branches are complicit.

2014 MUST be the year we take our back from the criminal element that has got a stranglehold on our government!

Eleven GOP attorneys general say the Obama administration is breaking the law by repeatedly making changes to ObamaCare without going through Congress.

“We support allowing citizens to keep their health insurance coverage, but the only way to fix this problem-ridden law is to enact changes lawfully: through Congressional action,” the attorneys general wrote in a letter to Health and Human Services (HHS) Secretary Kathleen Sebelius. “The illegal actions by this administration must stop.”

They say the healthcare fix was “flatly illegal under federal constitutional and statutory law.”
HHS did not respond to a request for comment.

Signatories include Gregg Abbott of Texas — who’s running for governor this year — and Ken Cuccinelli of Virginia.

James D. “Buddy” Caldwell of Louisiana was previously a member of the Democratic Party, but switched to the GOP in 2011.

Republicans have often criticized the administration for making changes to the law after the fact. Other switches included the decision to delay the employer insurance mandate for a year, something many lawmakers said should have required a congressional vote.

Obama changed the law to allow insurance companies to allow canceled plans after coming under criticism when millions of people found out their plans were no longer being offered despite Obama's repeated promise that under ObamaCare, people would be able to keep their insurance plans if they liked them.

The officials point to the 1985 Heckler v. Chaney case, in which the Supreme Court concluded that some enforcement actions of laws might be subject to judicial review first.