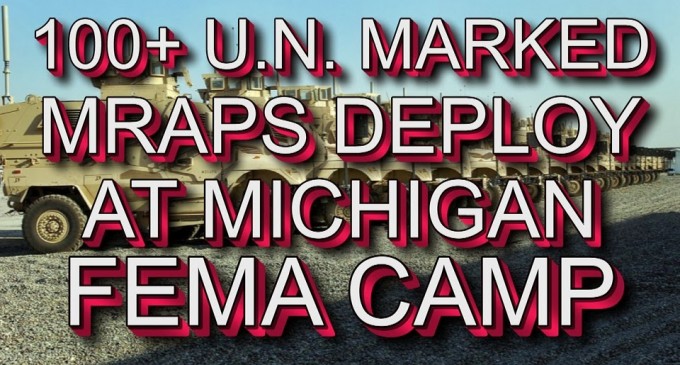 Bob Powell, former Marine and journalist for “The Truth Is Viral”, interviews a trucker who claims that 100 UN marked MRAPS were deployed in Michigan.

Watch this video and take it for what you want.

A call has come out from a person calling himself Truth Is Viral. Traveling at night, on off roads, in the cover of darkness, he comes with a video of 100 UN Marked MRAPS on Deploy to Camp Grayling, Michigan. Meanwhile FEMA is preparing at great links for Civil Unrest.

What is causing this mass unrest they are preparing for could be a number of different things. One major factor that could cause mass panic are reports like the one we at freepatriot.org brought you of the Federal Government cutting off EBT out of spite for the fowl ups in the operating systems, caused by the President Obama Cabinet pulling the plug on the system during the shutdown. This would mean that thousands of people in the lower poverty level states to be without needed food and supplies. Not counting the list of the ones that don’t work that can, an estimated 8 million, and the illegal aliens that get WIC, EBT, HUD Housing and other support due to children born in the US, there are literally millions of disabled Americans that would be without resources. Would that not be enough to cause this?

There are also rumors of the UN moving in due to the treaty for small arms and a report that President Obama is once again thinking of Executive Order to once again circumvent the Second Amendment. Recently a a Navy Seal came forward, who not only confirmed self outed ex-CIA member Dr. Jim Garrow on the litmus test, that the second question asked is if you would disarm American Citizens. Over 51 Senators voted to oppose the UN treaty saying that it would kill the Second Amendment and sent a letter to President Obama calling him just shy of violating Article 3 of the Constitution. If the Federal Government does not think this would cause a riot of mass proportions and deadly violence they obviously have not been paying attention to their own State Ran Media.

Then you have the entire Obamacare fiasco. We have people telling Town Hall meetings that DHS is building an army and asking “is everybody blind!” Several factors could cause the riots that they are seeking, it is more become making the public aware so they don’t fall for the trap.

Meanwhile, the DHS equivalent of tanks with UN stickers move in position under our noses.  You can watch the video here: