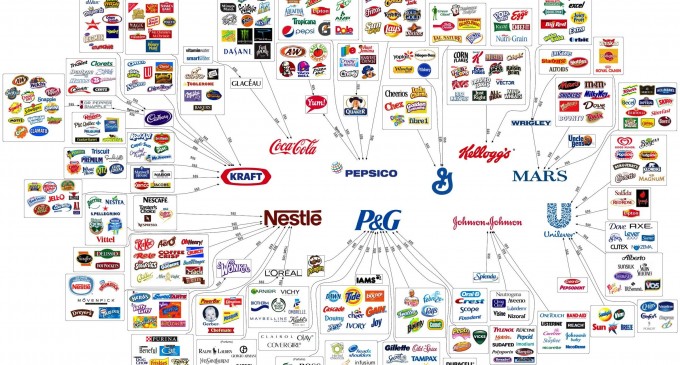 It's one thing to have heard that saying, it's quite another to feel its ramifications like we all do right now.

These corporations not only own the world's economy, they also own our government.

It's not going to be enough for them that we lose our Constitution and our liberties, in the end they want us to be serfs.

According to this chart via Reddit, called “The Illusion of Choice,” these corporations create a chain that begins at one of 10 super companies. You've heard of the biggest names, but it's amazing to see what these giants own or influence.

(Note: The chart shows a mix of networks. Parent companies may own, own shares of, or may simply partner with their branch networks. For example, Coca-Cola does not own Monster, but distributes the energy drink. Another note: We are not sure how up-to-date the chart is. For example, it has not been updated to reflect P&G's sale of Pringles to Kellogg's in February.)

$200 billion-corporation Nestle — famous for chocolate, but which is the biggest food company in the world — owns nearly 8,000 different brands worldwide, and takes stake in or is partnered with a swath of others. Included in this network is shampoo company L'Oreal, baby food giant Gerber, clothing brand Diesel, and pet food makers Purina and Friskies.

And it's not just the products you buy and consume, either. In recent decades, the very news and information that you get has bundled together: 90% of the media is now controlled by just six companies, down from 50 in 1983, according to a Frugal Dad infographic from last year.