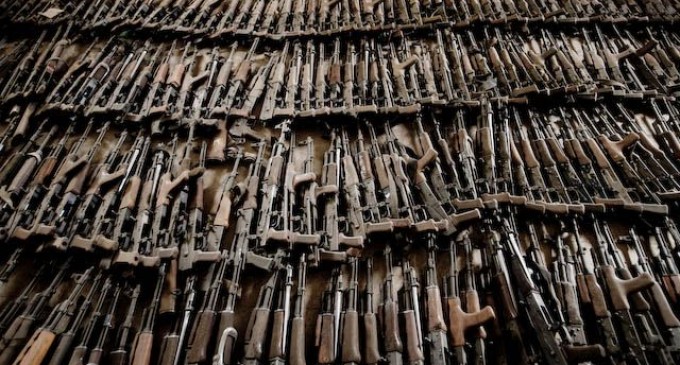 Obama wants you to believe that it’s necessary to send guns to ‘the most dangerous terrorist group in the world’ in order to overthrow the Syrian government because they ‘supposedly’ used chemical weapons on their own people.

That’s assuming that we care nothing for the people that died on 9/11, so much so as to support ‘our greatest enemy’.

Of course, this is more BS peddled by Obama. There is no way that we could agree to dismiss the highest crimes perpetrated against Americans in order to punish another counties’ government for crimes we can hardly prove and who is in no way threatening us.

Hillary Clinton admits that we created Al-Qaeda to fight the Russians.

Then Al-Qaeda attacks us on 9/11, which gave the government license to create an enormous spy grid used against Americans and other governments,  enter into more wars and disembowel the Constitution.

Then we use them to try to overthrow the Syrian government.

Boy, those Al-Qaeda sure are useful!

WASHINGTON , September 12, 2013 — Today the United States is waking up to news that the first publicly acknowledged shipment of lethal aid has made its way to Syria. It comes as part of President Obama’s efforts to support the Syrian Opposition, and punish Syrian President Bashar al-Assad for the alleged use of chemical weapons, which violates a 1925 International Proclamation.

Before the 9/11 terror attacks, the United States was actively engaged in training and arming radical Islamist groups in the Middle East in order to undermine our enemies and supposedly support our national interests. After the Towers fell, the Pentagon was damaged, and Flight 93 was downed, the United States realized that they could not support such extremist groups anymore. Instead, America began a global campaign to combat terrorism, and punish those responsible for the September 11 attacks.

12 years later, we are back to arming radical Muslims, having forgotten, with stunning speed, the lessons of the previous 30 years.

We all understand that the enemy of my enemy is my friend. It served as the basis of our Cold War foreign policy stance towards revolutions and civil wars around the globe.

But when the enemy of my enemy, is also my enemy, it would seem as though choices for options range between “absolutely not” and “this is a terrible idea.”

The fact that this is an option in the first place is appalling. The fact that there is someone in the government with input on national defense strategy who raised his hand during  a meeting in between Angry Bird sessions and cat videos on his phone and said ‘What about arming al-Qaeda?’ Those are the kind of moronic, useless DC  government yuppies who travel in packs on H Street looking for a bar with a large enough craft beer selection to jolt them out of their almost permanent haze of perceived self-importance.

We understand that action needs to be taken, and that the Opposition forces are currently losing the war. But at the same time, we are actively engaged in combat operations against al-Qaeda and their allies. We are quite literally handing weapons to the enemy. This would be tantamount to the British government sending guns and ammo to the IRA to help them fight a Civil War in Northern Ireland. It  is almost like the Union sending arms to the Confederates in order to combat an Indian uprising.

To quote a popular expression, “that dog just don’t hunt.” Except it does hunt because we just gave it automatic weapons, it can hunt a lot.

Does everyone understand what is going on? The United States, one day after the 12 year anniversary of the 9/11 Terror Attacks, has now contributed arms to the cause of those same people who perpetrated them. We are now actively supporting a terrorist network, not just a terrorist network, THE terrorist network. It has taken 12 years for the United States government to forget the names of those responsible for thousands of American dead, it has taken 12 years for the government to decide that those lives, and the sacrifice of thousands of service members do not matter anymore. This should hurt, and it should hurt a lot.

What should be running through everyone’s mind is that while we are arming al-Qaeda in Syria, we are fighting them in many other areas. Those same weapons we supply the rebels with in Syria, could be used against our forces in Iraq, Afghanistan, Turkey, or against our allies in Israel.

The potential benefit of this action is far outweighed by the potential harm it could inflict. During his anti-gun campaign several months ago, President Obama declared that any gun law, no matter how stringent, that could save the life of one child was worth trying. The question should be asked of him now; if not sending weapons to the Syrian Opposition saves the life of one American service member, is that worth trying?