A judge in Chesterfield, VA has ruled that cameras are allowed in restrooms as long as it’s not pointed directly into a stall.

Dennis Smith, the owner of Mechanicsville’s Calabash Seafood Restaurant and Midway Lounge, was arrested after he installed camera’s in the men’s bathroom to combat vandalism.

He argued that since the cameras were pointed at an area that anyone could see when the door is open that there was no expectation of privacy. The judge agreed with the argument, which has set a precedent in the state for allowing video cameras in restrooms.

CHESTERFIELD, VA (WWBT) –
The owner of Mechanicsville’s Calabash Seafood Restaurant and Midway Lounge is off the hook, after being charged for installing surveillance cameras in the men’s bathroom.

A judge found the owner, Dennis Smith, not guilty of unlawful videotaping. Smith has long maintained that he installed the cameras to stop repeated vandalism in the restroom. Smith also says that the cameras, positioned right above the stall, were aimed at the door, not at anyone using the toilet or urinal.

Regardless, Smith was arrested after he installed the cameras last summer. There was even an episode of a customer ripping out the camera, after its presence infuriated him.

“The cameras that were in these bathrooms were for security reasons only, and nothing inappropriate was taped by them,” said Smith.

The criminal charges surfaced after security footage revealed a band member changing in his boxers, near the bathroom door.

Smith insisted that any patron could see someone in that particular spot, if the door swung open. The judge agreed, and ruled Smith not guilty.

NBC12 legal analyst, Steve Benjamin, says if you’re in a private area, like a bathroom, but standing in an area that can be easily viewed by the public, like in front of the door, the expectation of privacy changes.

“At any moment, the general public could have seen [the band member] standing there in his underwear,” said Benjamin.

Benjamin suggests any business owner installing security cameras in sensitive places, should have a sign warning the public. 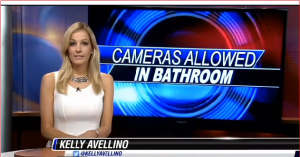