The labeling and attacks upon conservatives and Constitutionalists as ‘domestic terrorists’ or ‘right-wing extremists’ is a set up for a future event where the government fakes an attack upon itself or the country and its citizens, called a ‘false flag’ – blaming ‘right wing terrorists’ for the act.

What will that false flag event be? A drill by the National Guard that took place this past January gives us a clue.

The imagined scenario involved two ‘right wing terrorists’ who used chemical, biological and radiological agents against members of their own local community because they believed the government was abusing the 2nd Amendment.

This is an example of the ludicrous picture the government and leftist media wants to carve into the minds of citizens and military – that Conservatives are so dangerous they will attack ordinary citizens with ‘weapons of mass destruction’.

False flag events are not uncommon at all. It’s a method that governments have used for a long time to accomplish a goal they otherwise couldn’t – and they have admitted using them on more than one occasion. See this article on ZeroHedge as reference.

Many people have a hard time believing in false flags, even though governments admit using them, simply because ‘it’s not something they would do’. The name for this is called a ‘normalcy bias‘.

These people really don’t understand the nature of a sociopath and don’t know history.

After this ‘right wing terrorist’ false flag occurs, the government will have an excuse to come in with great force against the smallest dissenting voice. The police state will be in full swing.

“This and no other is the root from which a tyrant springs; when he first appears he is a protector.”
– Plato

“If Tyranny and Oppression come to this land, it will be in the guise of fighting a foreign enemy.”
– U.S. President James Madison

“Why of course the people don’t want war … But after all it is the leaders of the country who determine the policy, and it is always a simple matter to drag the people along, whether it is a democracy, or a fascist dictatorship, or a parliament, or a communist dictatorship … Voice or no voice, the people can always be brought to the bidding of the leaders. That is easy. All you have to do is to tell them they are being attacked, and denounce the pacifists for lack of patriotism and exposing the country to danger. It works the same in any country.”
– Hermann Goering, Nazi leader.

Portsmouth Chief of Police Bill Raisin told NBC 3 WSAZ-TV in Huntington, West Virginia that the drill accurately represented “the reality of the world we live in,” adding that such training “helps us all be prepared.”

Buckeye Firearms Association spokesman Chad Baus told Media Trackers that “it is a scary day indeed when law enforcement are being trained that Second Amendment advocates are the enemy,”

“The revelation of this information is appalling to me, and to all citizens of Ohio who are true conservatives and patriots, who don’t have guns for any other reason than that the Second Amendment gives them that right,” Portage County TEA Party Executive Director Tom Zawistowski said in a separate Media Trackers interview. 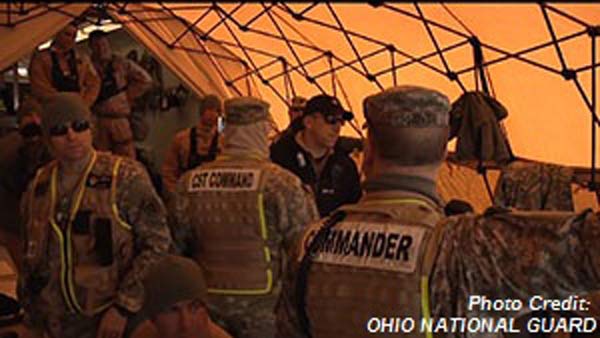